In an intense race among the automakers, Tesla Inc. is emerging as the cream of the crop, with its shares crossing US$ 1000 mark. On the stock market front on 10 June 2020, Tesla (NASDAQ: TSLA) gained an edge over Toyota as investors rushed towards the most valuable car company. Meanwhile, the monumental success, especially amidst the pandemic-ridden scenario and the chaotic social unrest in the US, is channelling new hopes for the economy.

The shares are riding high, possibly backed by the automaker’s new plan to gear up the volume production of the all-electric semi-trucks.

Notably, hitching a ride on the growing market optimism around electric cars and company’s latest announcement, Tesla stock rose by 8.97% intraday to close at US$ 1025.05 by the end of the trading session on 10 June 2020. 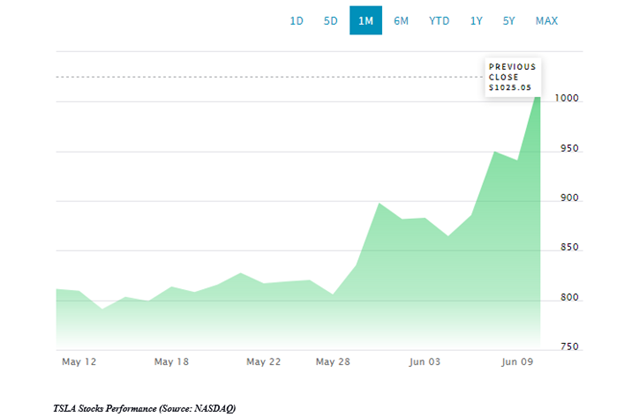 Elon Musk, CEO of the Tesla Inc. indicated in the employee memo that the company would be producing truck batteries at its Giga Nevada-based battery factory, though he did not point when and where the semi-trucks would be produced.

Tesla had earlier revealed the prototype for battery-powered hauler in 2017, which is expected to go into production in 2021.

Meanwhile, the rival firm, Nikola Corporation (NASDAQ: NKLA) saw its share price rise substantially after its founder and chairman announced that the company would soon commence reservations of its electric pickup truck. The shares of Nikola have risen ~127% in the initial ten trading days of June.

Glimpse at the orientation of investors’ trust

The investors are heavily placing their bets on the electric automotive alternatives with the rising sustainability concerns along with innovative cost-saving solutions.

The tech-savvy orientation of the market was even visible across Australia and other countries where investors’ favourability towards growth-driven tech stocks has shot up significantly.

Meanwhile, Tesla consumers, along with staying ahead of the curve in terms of trends, are also welcoming eco-friendly auto-solutions.

There is a growing indication that EV penetration is expected to “ramp up significantly”, while China is witnessing strong demand for Model 3.

Meanwhile, few days back, Elon Musk’s another company in its space centric endeavours realised substantial victory as its Space X rocket was successfully launched into space.

The euphoria around the Tesla stock is built with brimming expectations for the ‘game-changing” battery developments, which many experts would be eyeing during the Battery Day.

The Quarterly Update 2020 of Tesla indicated that while the company’s Y-o-Y revenue increased by 38%, its Q-o-Q saw a decline of 19%. Furthermore, Y-o-Y EBITDA (adjusted) increased by 514%.

The company’s selling mix continues to shift from Model X and Model S to more budget-friendly Model Y and Model 3. The company made also made investments in the preparation of Model Y in Fremont and Gigafactory in Shanghai.

However, many believe that soaring Tesla stock could also prove to be momentary infatuation of the investors as the economic outlook seems grim for the US. At the same time, the second wave of infection could prove lethal for the economic scenario, which is currently grappling with the job losses and sluggish economic activities.

Elon Musk’s comment on the overvaluation of Tesla stock further aggravated the debate if the company is being valued more than what its product offering deserves. Many warn that the ‘Tesla Mania’ is a fad, primarily driven by the overambitious investors. Nevertheless, the growing vehicle deliveries are living up to the investor’s trust in the stock

Tesla is relishing a massive boom in its stock prices owing to the continued growth in the vehicle deliveries and the promise to mass-produce the semi-electric trucks. The growing demand for Model 3 in the Chinese market is further stimulating the growth prospects for the company. However, on the other hand, the grim economic scenario post the Covid-19 and social backlashes can create significant hurdles to implement the plans.