The Bowsprit Oil Project in Breton Sound Area is on lease areas spread over 1,154 acres and is approximately 70 kilometres southeast of New Orleans. The company in July 2019 had increased its working interest in the project from 50% to 100%. Moreover, Sun Resources is the operator of the leases.

Anglo-Dutch oil and gas company, Royal Dutch Shell had discovered the project in the 1960s, at a depth of 7,400 feet intersecting circa 30 feet of sand and producing 76,000 barrels from vertical wells.

In a market update on 28 November 2019, the company announced to have secured the final drilling permit - St. Bernard Parish permit and Port Authority approval - required to commence drilling activities at the Bowsprit-1 Well, inland waters of Louisiana. This is a major achievement for SUR, as the permitting was completed ahead of schedule (before the end of November 2019).

These permits are valid for one year.

The drilling program at the Bowsprit-1 Well would target three zones - T1, T2 and T3. As per the plan, a vertical pilot hole, part of the permitted well, would be drilled to an approximate depth of 8,000 feet, targeted towards evaluating the prospectively of the T2 and T3 reservoirs. Wireline logs would be used to evaluate the zones, after which the well would be plugged back to ~ 6,000 feet and then deviated to horizontal to target the T1 reservoir. 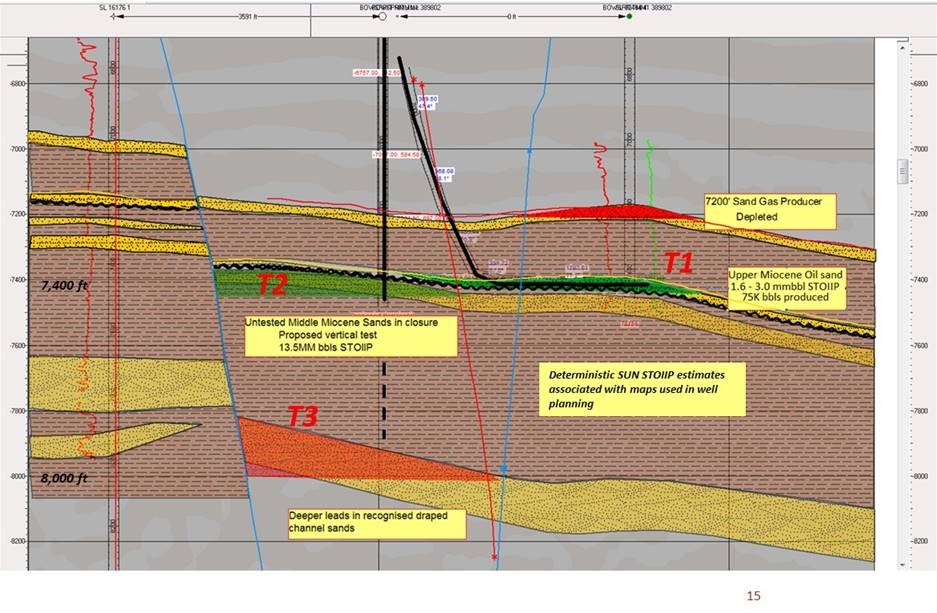 Sun Resources is in discussions with two entities engaged in production activities in the area to enable early production through tie back to a nearby production facility. The company has received provisional offers to process the fluids from Bowsprit, with the offers being less than USD 2 per barrel of fluid.

Based on the route shortlisted, SUR can lay a pipeline to either of these facilities, owing to which early production could be implemented for less than USD 1 million. The company plans to select the preferred facility soon, with permitting of the pipeline route expected to start in approximately three months. Once the permitting is secured, SUR could lay the pipeline within approximately 4-6 weeks.

Sun Resources is currently in farm-out discussions with several interested parties with the negotiations progressing well. Subject to securing funding through a combination of farm out and capital raising, the company plans to drill the well into the Bowsprit field in the first quarter of 2020.

The company is unlikely to require further production licences or other approvals in Louisiana; consequently, the well is expected to start oil production within two months of drilling. This early production option not just significantly boosts the field economics, it is quick to implement, low cost, and would provide early cash flow for the company. The Bowsprit-1 well would only require approximately 50,000 barrels of oil production to justify the pipeline laying economically.