Australian energy company, Sun Resources NL (ASX: SUR) is now a 100% operator and holder of a low CapEx, high margin oil appraisal/development project, Bowsprit Project. The company is currently preparing for the drilling of the first Bowsprit well and has already advanced the commercial and funding arrangements to support the drilling.

Terms of the Agreement: As per the terms of the legally binding Memorandum of Understanding signed between Pinnacle and Sun Resources, Sun needs to pay a cash consideration of US$250,000, prior to the drilling of the first well, and a royalty of 5% of the gross production revenue to Pinnacle. It is to be noted that prior to the royalty payment, Sun Resources is entitled to collect the first US$12 million in gross revenues.

The transfer of ownership is subject to payment of the cash consideration and execution of Agreements, namely Sale and Purchase Agreement and Royalty Agreement. If the transaction is not completed by 1st March next year, the Agreement will be dismissed, and the project will revert to the original partnership.

Project Economics and Objective: In order to understand the true potential of the project, the company conducted extensive internal work and appointed three independent consultants to review the project. It has been assessed that the project area contains an undeveloped conventional Miocene aged oil sand at a depth of around 7,400 ft, located above a deeper 9,500 ft gas field, which was developed in the 1960s.

Subsequent to the 3D geological modelling of the Bowsprit Field, the company selected a primary well location and has already commenced the permitting of the well. 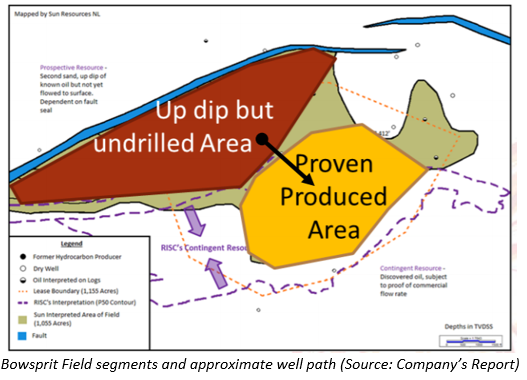 The main objectives of the first well are as follows:

Progress Towards Drilling: The company is planning to drill a vertical pilot hole in the middle of the field to maximise data gathered. Following this, the company intends to drill a horizontal section towards the southeast area of the field, across the crest of the four-way dip structure, where the crestal sand previously produced approximately 75,000 bbls of oil. The company aims to flow test the horizontal well for a short period to prove a commercial flow rate, and if the results are satisfactory, the well will be suspended as a future producer.

After selecting the well location, the company commissioned FensterMaker to commence permitting for the well and an initial seabed site survey has been conducted.

It is expected that the first well will be drilled in Q1 2020, and in the meantime, the company will prepare a detailed drilling program. The company expects that around 2.5 million barrels of oil and 3.5 Bscf of gas can be produced from five horizontal development wells with a breakeven oil price of ~US$25 to US$30/barrel.

At the end of the June quarter, the company had cash and cash equivalents of around $62,700.

In June 2019, the company announced a placement to raise $150,000 by issuing 75 million shares at $0.002, with two free attaching options for every three shares subscribed by investors. The options carry an exercise price of $0.004 per share and will expire on 31st December 2020. The placement was completed in the month of July.

Stock Performance: On 6th August 2019, Sun Resources’ shares were suspended from the official quotation at the request of the company, pending an announcement on the completion of a capital raising. The proceeds of the capital raising will be used to fund the payment of lease rentals for the company’s main asset, the Bowsprit Project.

The stock last traded at a price of $0.003 on 2nd August 2019 with total outstanding shares of ~956.06 million. In the last one month, the company’s stock price has increased significantly by 133%.