Shares of SportsHero Limited (ASX: SHO) marked an uptick of over 11% today after the company announced the launch of its esports prediction platform on WeChat China. SHO has also executed a Memorandum of Co-operation with China's second largest esports association, Wuhan's Esports Association (WEA).

With these achievements, the gamified social sports prediction platform is positioning itself to benefit from the rapidly growing market in China, which accounts for a third of global esports revenue.

The WEA has developed considerable omnichannel media exposure over the years and has built an audience of over 30 million. WeChat and Tik Tok are some of the wholly owned media channels of the WEA.

WeChat is one of the most popular global apps, with more than 1 billion monthly active users. Being embedded within the WeChat ecosystem, SportsHero will be able to speedily scale user growth as it removes the requirement to download an additional app.

SportsHero's Chinese esports platform will enable users to work together and participate within their communities by competing in prediction competitions in amateur and professional tournaments.

SportsHero's artificial intelligence prediction engine is proving to be a success. It's an appealing collaboration opportunity since it allows potential partners the power to move quickly, energise, engage, and profit from the digital communities they've built.

The company’s initial launch is expected to generate revenue through advertising, sponsorship, and monthly subscriptions.

The WEA is hoping to partner with SportsHero to establish an esports event administration platform for all participant registration and community engagement for the esports leagues within their association because of the Chinese launch of SportsHero's initial platform. 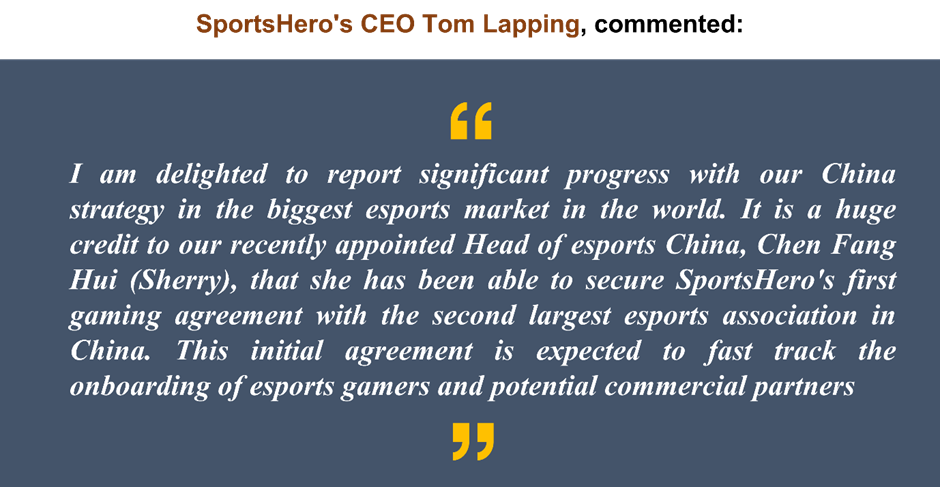 One year Memorandum of Co-operation

Under the Memorandum of Co-operation, Wuhan Monster Technology Co Ltd (WMT), a commercial arm of the WEA, has agreed to actively promote and drive user growth through SportsHero's platform. WMT will also introduce and deliver advertising and sponsorship opportunities to SportsHero. It will also host and promote prediction tournaments across Wuhan.

How is e-sports industry doing in 2022? | Expert talks with Michael Chou