Through the quarter ended 30 June 2020, Mount Burgess undertook a series of work on Nxuu. Even though there was a delay in a few planned test works owing to the COVID 19 pandemic, the Company continued its progress trajectory- 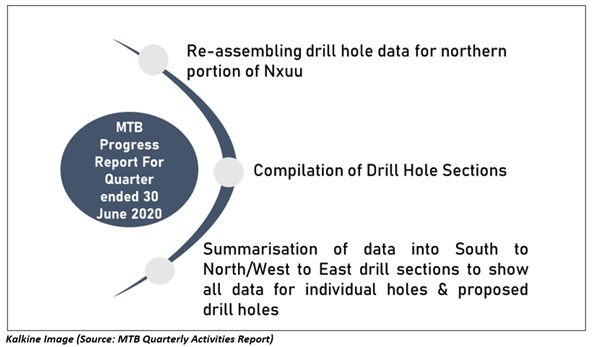 During the quarter, with an aim to review drill hole sections perpendicular to the strike of the mineralised trend, Mount Burgess re-assembled drill hole data for the northern portion of the deposit. These sections were designed to relay drill hole data with an NW/SE orientation so that they could more likely represent cross sections to the SW/NE mineralised trend. Based on drilling results to date, MTB can now better determine depths to barren dolostone basement for proposed drill holes. The Company notes that-

The sections were compiled to further affirm estimated depths to barren dolostone basement of the proposed drill holes planned for these sections containing holes already drilled. Moreover, this orientation is likely to offer a better understanding of the potential continuity of mineralised domains.

All this data has now been summarised into South to North/West to East drill sections to show all data for individual holes and proposed drill holes. This required generation of five separate maps combined with drill-hole cross-sections.

With COVID 19 restrictions gradually easing in Botswana, the Botswana Government has amended the formal application process to obtain regional access permits. This enables Mount Burgess to apply for and be granted permits for local staff, consultants to travel to the project site and enable the collection of diamond drill-core for planned test work. 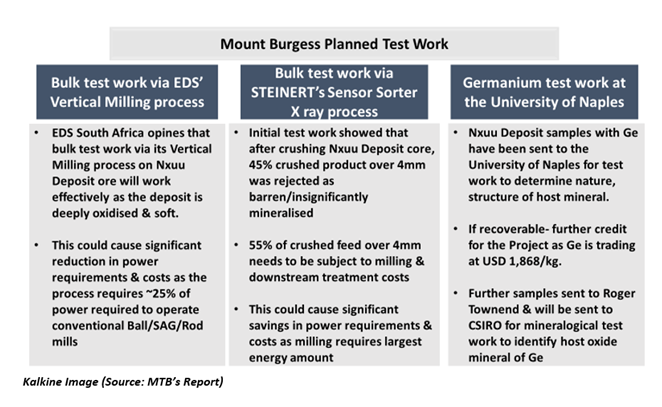 The Company suggested that once air freight services are available, the core can be collected from the site for export to Australia, for STEINERT to conduct bulk test work. Besides, post lockdown, Naples University will be able to commence Ge related test work.

Subject to funding and practical ability to access the project site, Mount Burgess plans to drill the proposed vertical drill holes that will be then assayed for Zn/Pb/Ag/Ge/V. An Indicated/Measured resource compliant with the 2012 JORC Code is expected once drilling and assaying are complete.

Recent drilling results that included assaying for Vanadium, show that mineralisation at Nxuu extends beyond the zones of Zn/Pb mineralisation, increasing overall metal endowed domains within the mineralised quartz wacke- 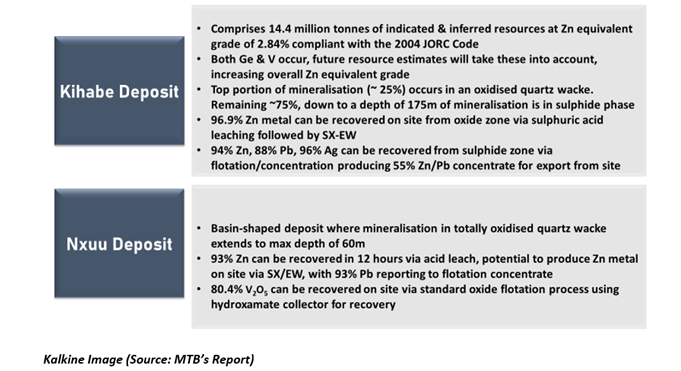 During the quarter, MTB received further loan funding of $3000 from a Company Director. Subsequently, on 16 July it received a cash flow boost of $2500 from the Australian Government.