In a recent development, Sabre Resources Limited (ASX:SBR) secured a grant from the Western Australian Government that will co-fund diamond drilling at its 75%-owned Sherlock Bay Nickel-Copper-Cobalt Project. 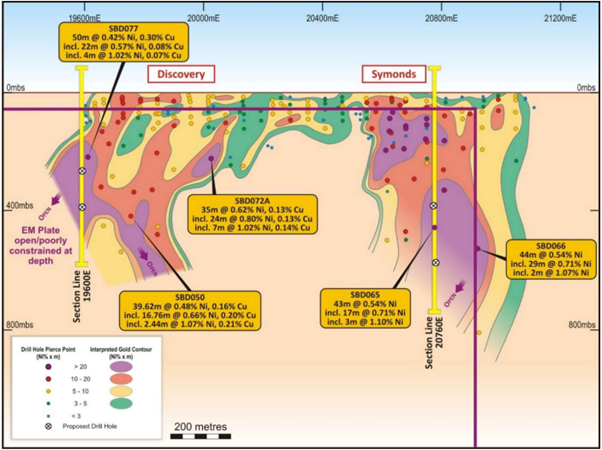 Longitudinal projection of Sherlock Bay with the Discovery and Symonds deposits

The WA government co-funding will cover up to 50% of direct drilling costs and up to AU$10,000 in mobilisation costs.

The grant is based on the program, which is designed to test the concept that huge sulphide deposits are associated with the intersection of the mineralised horizon at Sherlock Bay and the “neck” of the sulphur-saturated Sherlock Intrusive.

The company has lined up a diamond drilling rig to carry out the campaign. Program of Work (PoW) for the drilling operation has been submitted to the WA Department of Mines (DIMRS).

Sabre plans to drill four diamond holes with a combined depth of up to 2,400m. These holes will test the two primary target zones identified to have potential for higher-grade to massive sulphides down plunge of both the Discovery and Symonds resources.

The drilling campaign is planned to be coupled with a Downhole Electromagnetic (DHEM) survey. The goal of the survey will be to identify large sulphides associated with either in-hole or off-hole conductors, same as successfully done by Azure Minerals at the Andover nickel sulphide deposit, which sits 60km west of Sherlock Bay.

The diamond drilling program is expected to commence in June.