The past six months have been a roller coaster journey for the Australian Stock Exchange, primarily due by the prolonged virus turmoil. The markets have struggled for a good part of 2020, and the economy will need considerable time to recover from the coronavirus-induced crisis, due to its severity and longevity.

In the last 24 hours, the country has seen 400 new COVID-19 cases (as per the government’s Department of Health), which has resulted in the current uncertainty in the market.

Given the persistent situation affecting the world, market players are now looking at some of the popular stocks. In this article, we would look at those stocks and cover their recent updates.

Westpac Banking Corporation is a provider of banking, financial and related services. The Company announced that it intends to bring back ~1k jobs in the country with the new roles primarily in call centre division and operational support to consumer finance and home lending functions.

WBC had announced on 28 July that it had created a new Group Operating Office, thus, bringing together Group Operations and Group Technology. The Company also stated that Mr Scott Collary had been appointed as the Chief Operating Officer to lead the new division. Mr Collary would start his role later this year, which would depend on regulatory approvals.

Commonwealth Bank offers personal and institutional banking solutions across Australia, NZ, the US, and the UK. The bank has entered into an agreement with two of its strategic partners Square Peg and Zetta Venture Partners. The partners would support new banking ventures in artificial intelligence, data, and analytics. The new alliances coincide with the announcement of X15 Ventures’ 4th new venture, Backr.

CBA has dedicated US$10 million to the latest funds for the partners to assist the sourcing, scaling, and financing of local fintechs, as plus the development of evolving AI businesses in Australia.

The bank’s X15 also introduced Backr, its fourth new venture. Backr offers a digital, task-based methodology to begin a small business, guiding business owners via the process from the registration of their business name and ABN, to forming a business plan and employing simple tools to get them trading fast and with comfort.

With Square Peg and Zetta as strategic partners, the Company is looking forward to working with them to provide new solutions to its customers, using the latest technologies, artificial intelligence, and machine learning models.

Rio Tinto Limited, a metals and mining company engaged in the production of copper, gold, iron ore, coal, aluminium, borates, titanium dioxide and other minerals and metals unveiled the maiden Inferred Mineral Resource at its Winu copper-gold project. The Company discovered a new zone of gold dominant mineralisation ~2 km east of the Winu deposit in the Paterson Province of Western Australia.

On 17 July 2020, the Company also updated on its second production results for the quarter ended 30 June 2020. Below table show production during the period.

The Company highlighted that they were able to achieve production guidance for FY2020 for iron ore, metallurgical coal and its operated copper and energy coal assets. However, the petroleum production was slightly below guidance with lower than projected gas demand because of COVID-19 impact in the June 2020 quarter. 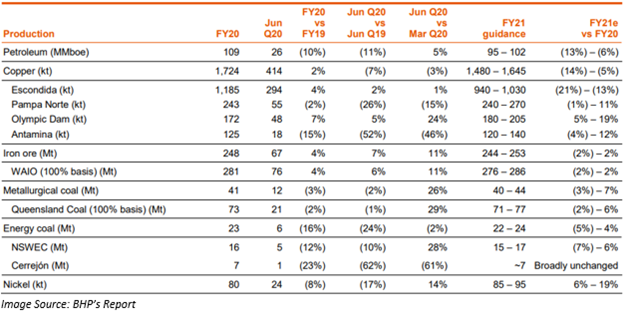 Iluka Resources Limited, a metals and mining company engaged in the production of mineral sands, released its quarterly review to 30 June 2020 on 28 July. The Company reported a total zircon, rutile, synthetic rutile production during the June quarter was 135,000 tonnes. During 1H FY2020, the Z/R/SR sales were 242,000 tonnes which were 302,000 in 1H FY2019.

By the end of the June 2020 quarter, the Company had net cash and cash equivalent of A$62 million, which reflects a free cash flow of A$46 million in 1H FY2020 while investing A$50 million in Capex.

The Company updated that the SaaS model remained as projected with continued recurring revenue. There were restricted new device sales & decreased patient testing during April and May while the US experienced a wide COVID-19 linked shutdown. With the ease in the lockdown in June 2020, a sharp rebound was noted which continued in July 2020.

SOZO® SaaS Revenue grew +36% to A$0.9 million on pcp. The SOZO® SaaS revenue was in line with the previous record quarter, exhibiting the strength of the recurring revenue from SOZO accounts. 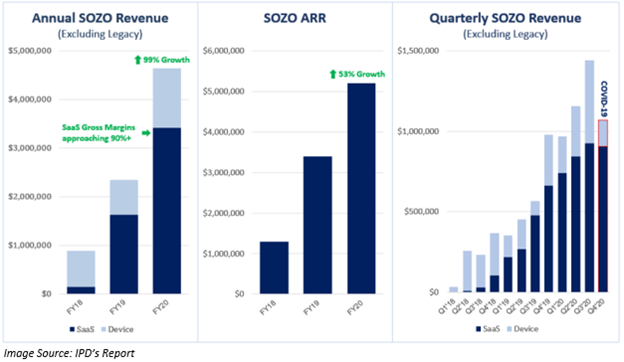 In the upcoming quarter, the focus of the Company would be in areas such as:

During this quarter, the Company noted an increase in cash receipts of 112% to NZ$5 million as compared to the previous corresponding period. The Company also completed the share purchase plan where it raised an additional A$9 million after the completion of the A$28 million placement. Volpara raised funds to strengthen the balance sheet and pursue M&A opportunities.

SRG Global Ltd, an engineering-led specialist maintenance, mining services and construction group, has secured two projects in the last week. The recent one was of A$30 million while the previous one was a A$40 million deal.

On 28 July 2020, SRG Global Ltd secured two contracts with Water Corporation valued at approx. A$30 million. The scope of this project includes the specialist design and construction of two water tanks in Western Australia. The work is projected to commence in July 2020, and the duration would be for 18 months.

On 23 July 2020, it secured two specialist facades contracts valued at A$40 million. As per the agreement, the Company is expected to design, supply, as well as installation of specialist, engineered curtain wall facade in Sydney and Melbourne. 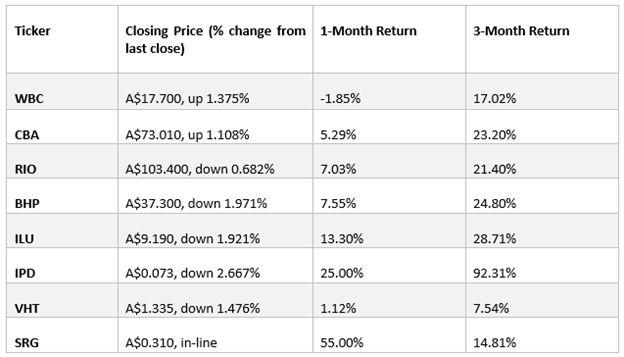