KTA has achieved another significant milestone in the development of its project portfolio. On 6 July 2020, KTA announced that it has substantially expanded its landholding in the Lachlan Fold Belt through direct license application made for the Rand Project, covering four contiguous exploration licence applications over a combined area of 580km2 in the Central Lachlan Fold Belt, NSW.

The Rand Project is said to be highly prospective for multimillion-ounce mineralisation-styles, including shear-hosted and intrusion-related gold systems like De Grey's Mallina Gold Project, and moreover, the Project captures the historical Bulgandra Goldfield, which indicates the potential of the project for shear-hosted and intrusion-hosted gold.

Related: Krakatoa Resources Announces Results from RAB drilling at Quartz Ridge Mine, Stock Up by 25%

Exploration at the two reefs was carried out by Transit Mining Pty Ltd between 1985 to 1989 where fourteen rock chip samples were collected during geological mapping and returned strongly anomalous results:

Results from historical reverse circulation drilling showed that gold is being leached from within the upper saprolite and reflected that adequate drilling depths were not achieved, and no subsequent exploration work was conducted.

Read: Is KTA next to fire with Copper & Gold in the Lachlan Fold? Shallow Gold intercepts discovered

The Project lies in the Tabberabbera Zone of the Central Lachlan Fold Belt between two regional shear systems, including: 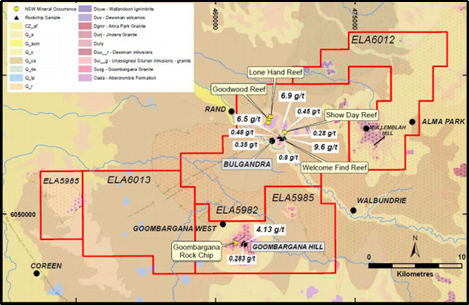 In the Central Lachlan, gold mineralisation is spatially related to the granitoid bodies, their contact aureoles and associated regional structures. Moreover, gold mineralisation was also most likely introduced with the emplacement of the I-type Jindera granite during the Tabberanean Orogeny, making Rand a prospective area for the intrusion-related gold deposits.

More importantly, in the Bulgandry Goldfield, gold mineralisation is hosted in quartz lodes in a regionally persistent shear zone, where mineralisation is best characterized by the high-grade Show Day Reef group of workings which directly lie over an interpreted primary shear.

KTA is optimistic that the gold occurrences at Rand fit within the classification of significant gold deposits known as Intrusion-related gold systems and granite or sediment-hosted sheeted veins and stockworks like those already identified at Bulgandra are considered characteristic of IRGS systems.

The Company is highly optimistic about obtaining the exploration licence for the Rand Project and expects that the same shall be granted within three to six months.