Likewise, the Niagara gold project advanced with GTI conducting an airborne magnetic survey targeted to follow up anomalous soil sampling results. In addition, the Company entered into a binding agreement to acquire 2 mineral leases from TSXV listed Anfield Resources, more than doubling the size of its land position in the area by conjoining 2 of its most prospective projects at Jeffrey and Rats Nest Projects.

With the review of the recently acquired data package, covering the leases being acquired from Anfield and the existing Jeffrey, Rats Nest and Moki project areas, GTI believes that the data package significantly enhances exploration planning and targeting work.

On 22 July 2020, the Company advised that it has secured a significant data package, identified during its due diligence enquiries into the 2 mineral leases being acquired from Anfield and existing Jeffrey, Rats Nest and Moki project areas in the Henry Mountains Utah. On 6 August 2020, GTI affirmed completion of this data package’s desktop review.

Currently, the Company is progressing with preparations of Q3 exploration activity and is completing field checks of data across the Henry Mountains projects.

It should be noted that the acquired data package contains valuable information regarding the Jeffrey, Rats Nest and Moki claim groups. It includes drill hole logs and maps, resource maps, assay reports and project level exploration and evaluation reports.

Additionally, the data package provides drill intercept maps and an evaluation report for the Moki project and is of particular interest as significant historical drilling occurred on this property, positioned immediately east of the Tony M Mine owned by Energy Fuels Inc. 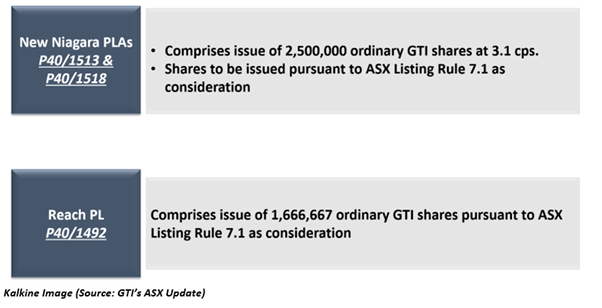 According to GTI, the acquisition of 2 additional licence applications at Niagara strengthens the Company’s land holding over the mineralised trend near Kookynie. It creates a contiguous package of applications covering ~5km of historical Niagara gold trend, including the Company’s existing E40/342 tenement.

The newly consolidated belt hosts numerous historical shafts, workings within the Niagara gold trend. It provides the chance for GTI to focus on exploration within the highly prospective but underexplored mineralised corridor.

The Company has also already received aeromagnetic survey data for the Niagara project area, which comprises the New Niagara PLAs. GTI believes that the processing and interpretation of this data will help in refining a follow up field program, likely to include additional infill auger soil sampling and ground mapping to aid in drill targeting.

In due course, the Company could provide more information concerning interpretation of the survey data and impending fieldwork program.

Between 2011 and 2013, exploration at Reach prospect (within P40/1492) was conducted by Midas Resources Limited, now Hammer Metals Limited (ASX:HMX). 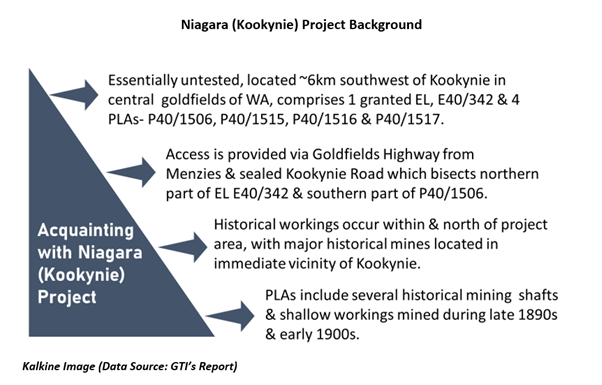 GTI has satisfactorily concluded technical, legal and commercial due diligence review of the two new Utah state leases being acquired from Anfield and is moving to complete the acquisition within 3 months of the agreement being signed in accordance with the Term Sheet. Meanwhile, it is awaiting drill core assay results from drilling completed at the Jeffrey project in June 2020.

At the Niagara gold Project, where term extension has been granted, future exploration is set to include ground truthing, surface sampling and drill targeting with a program of work (PoW) approved for up to 5,000 metres of drilling. Moreover, further interpretation of magnetic data from the recent aeromagnetic survey is being completed to help understand the mineralising geological system and to target exploration work. Drilling is expected during September.