The stock of GTI Resources Limited (ASX:GTR), currently trading at $0.032 on 14 August 2020 (02:07 PM AEST), soared 10.34% a day before following the release of company’s update on accelerating gold exploration activities at its Niagara Gold Project in Western Australia.

To know about the Company’s projects located in the world-class uranium and vanadium producing state of Utah in the USA and the central goldfields of Western Australia, READ HERE: Acquainting with GTI Resources’ Attractive Uranium & Gold Project Portfolio & Developments

GTI has confirmed the commencement of a phased exploration program, including its maiden drilling campaign at the Niagara Project. The decision has been made primarily owing to promising anomalous soil sampling results and spectacular drilling results achieved by the Company’s near neighbours, Metalicity (ASX: MCT). GTI completed an auger soil sampling program during March 2020, to investigate the potential for economic gold mineralisation within granted exploration licence E40/342. 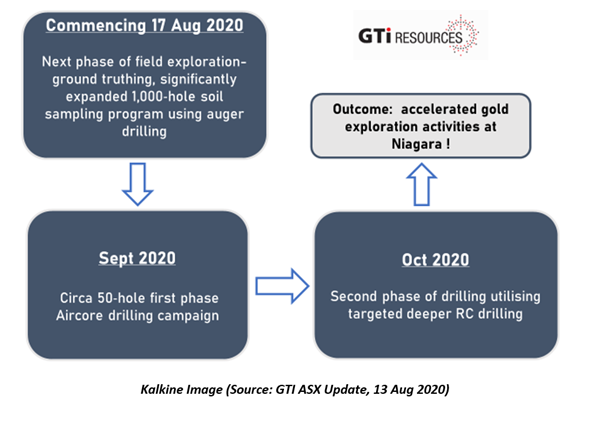 Executive Director Bruce Lane believes that Niagara is an exciting exploration project covering more than 8 kilometres of prospective strike length on the underexplored Niagara Trend, adjacent to historical high?grade gold mines. He further advises that the Company is highly encouraged by the results of July’s aeromagnetic survey coupled with geochemical results from GTI’s initial soil sampling program. These programs are guiding the Company’s structural modelling and interpretation and offer some very interesting targets.

Set to commence on 17 August 2020, the next phase of field exploration at the Project involves ground truthing and a significantly expanded 1,000?hole soil sampling program using auger drilling. The Company states that the geochemical results from this program will be integrated into the existing geochemical, geophysical, and geological data sets.

Results from the August field exploration are expected to aid in targeting the circa 50?hole first phase Aircore drilling campaign that has been planned for September 2020.

It should be noted that the Company has existing PoW approvals in place to conduct 10,000 metres of drilling at the Niagara Project. In October 2020, following the Aircore drilling campaign, GTI plans to conduct the second phase of drilling utilising targeted deeper RC drilling. RC drilling aims to test the most attractive zones of interpreted gold mineralisation.

According to the company, the field work is expected to refine the company’s understanding of mineralised system and will aid in locating the most exciting prospective zones for October’s RC drill program.

Meanwhile, interpretation of historical data and planning for the next stage of exploration is underway at the Utah uranium and vanadium projects.