Best intercepts from the first two target areas include the following:

Further assay results for Targets 2, 3 and 4 from the program are anticipated to be received during next month, and Phase 2 drilling is expected to recommence in the month of September.

The Company completed the Phase 1 Yule South Aircore drilling program over a total of 199 holes drilled for a total advance of 13,275 metres covering the five gold target areas.

GSM tested the hinge zone of an interpreted Mallina Basin mafic-metasedimentary rock package and a prominent north-trending magnetic structure trending through the eastern part of Target 1 under the reconnaissance first pass angled Aircore drilling. On this target, a total of 30 drill holes have been completed for a total advance of 2,815 metres.

Of these gold intersections based on four-metre composite samples, GSM has now collected one-metre samples and submitted for assay.

Moreover, GSM drilled a scissor hole (20GSYSAC0199) angled 600 west under drill hole 20GSYSAC0002 to obtain better insights about the attitude of the mineralised zone observed in the drill hole. The Company has submitted samples from these additional drill holes for assay.

GSM has completed 47 holes at Target 5 for a total advance of 2,575 metres. Lately, the Company tested the northern contact zone of an interpreted magnetic intrusive body in the Portree Granite Complex through reconnaissance first pass angled Aircore drilling.

The Company is gearing up for further drilling for additional drill lines to the east, on the basis of the results and initial observations.

Significantly, multiple elevated and anomalous gold intersections of >10 ppb gold were revealed through the assay results, and the best intersection from drill hole 20GSYSAC0062 was recorded in a weathered mafic-ultramafic horizon with <2% fine-grained, disseminated and smeared foliation pyrite. 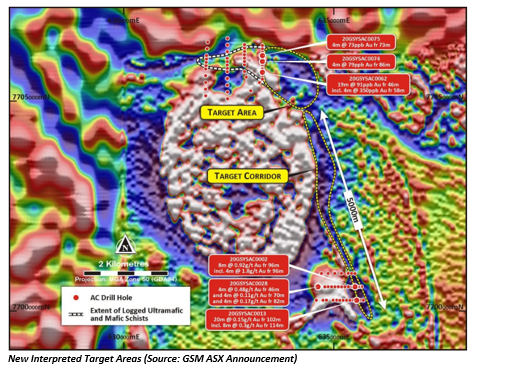 GSM has planned significant activities to be undertaken at Yule South Project as well as Yule North Project. 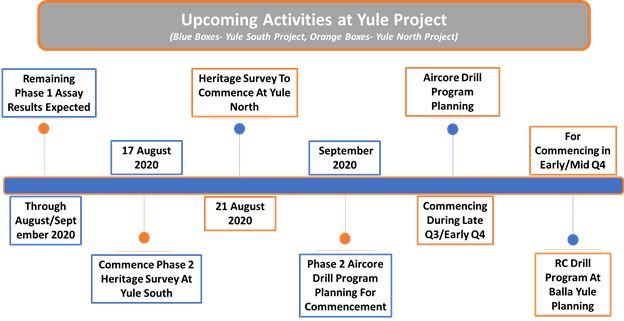