The Australian index ASX 200 gained 1.11% to 6,612.60 points during Monday’s trade, retracing last week’s losses. Investors witnessed a broad-based rally as all sectors were trading in the green. The energy sector gained maximum, followed by A-REITs and Consumer Discretionary. Even the Australian dollar regained pace after hitting its two-year low on Friday.

Even after a positive day, investors are worried and keep an eye on the central bank's rate decision due tomorrow. As per various media reports, another half a percentage hike is expected. 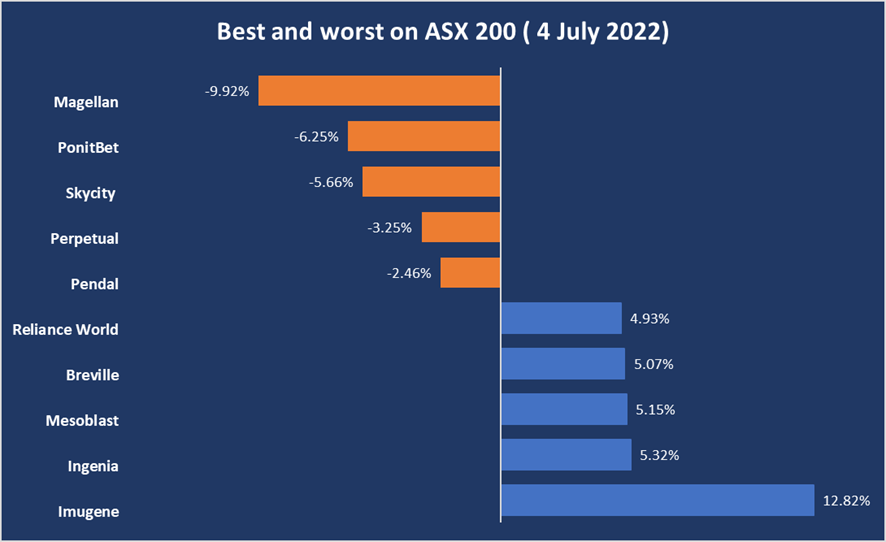 In the US, Stocks rallied near the market close on Friday ahead of a long weekend. US markets shall remain closed today, 4 July marking the Independence Day holiday.

In Asia, stock markets painted a mixed picture as investors continued to be anxious about the recession-economic slowdown and inflation. Japanese Nikkei ended Monday’s trade higher, while neighbour South Korean KOSPI fell. Hong Kong’s Hang Seng was lower alongside the Chinese Shanghai Composite, while the Shenzhen Component index traded up. Notably China again witnessed a rise in Covid cases during the weekend, increasing doubts about its economic recovery.

In Europe, stock markets are expected to open in a mixed state. Even though trading activity today might get impacted due to the US Independence Day holiday, investors will remain focused on economic datasets. Investors want to make the most beginning the second half of the year. Investors would keep an eye on the German trade and Spanish unemployment figures. In addition, Eurozone PPI numbers are also expected.