China is said to have been ahead of the curve in dealing with the coronavirus pandemic, and its digital businesses have shown impressive abilities to leverage digital technologies so that they could acclimatise and innovate while implementing new business models. The companies also focussed on redefining models for improved collaboration and coordination.

The digital businesses of the world’s second-largest economy have been the centre of attention for investors even in the times of pandemic. Also, tech stocks around the world have shown significant resilience amidst COVID-19. Foreign investors located across the globe have been eyeing to invest in these sprawling businesses.

INTERESTING READ: Chinese Stocks on Fire, Déjà vu or This time is different?

Tencent is one of Magellan Global Trust’s Top 5 Holdings

Founded in 2006, Magellan Global Trust (ASX:MGG) aims towards generating attractive returns for clients by investing in global equities and global listed infrastructure while protecting their capital. The trust has a history for generating and preserving wealth for the investors.

Magellan confirmed its holding of 4.9% in the Chinese tech company Tencent Holdings Ltd. The trust has been investing in high-quality global stocks that have significantly benefitted from various market developments in the past decade. Some of them are as follows:

MGG’s fund update for June 2020 shows that its holdings are mainly constituted by the disruptive businesses in information technology space and internet and eCommerce related businesses. Tencent is among the top five holdings of Magellan, as depicted in the figure below: 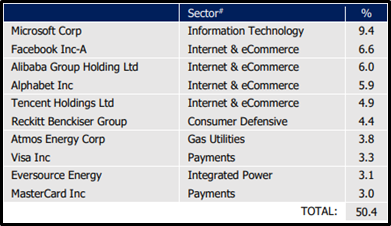 Co-Portfolio Manager of the Magellan High Conviction strategy, Chris Wheldon and co-Head of Magellan’s Technology team, Ryan Joyce said that the Tencent is a high-quality business with WeChat social network and communications app at its core. This is a platform where Chinese citizens conduct their digital activities and access digital content.

Magellan’s decision to invest in Tencent was influenced by:

Magellan began to keep Tencent under close watch in 2017 and believed that there was excessive optimism factored into its share price, likely reflecting the expected growth of its online gaming business. Magellan has been waiting for a far more attractive entry point that was brought to sight only recently.

Magellan is highly confident about the internet-related service provider’s ability to generate robust earnings from its rapidly growing cloud business in the future.

The Sydney-headquartered trust highlighted that Tencent’s WeChat mobile app, launched in 2011, is now the leading social network and communications platform in China and central to the Tencent’s success with 1.2 billion users averaging nearly 100 minutes per day, on the app. Moreover, WeChat contributes significantly to generating advertising revenue for Tencent.

Tencent’s past successes and a crucial source of profits, online gaming, is wildly popular in China, and the Company has reinvested internally to build out its suite of services.

Also, Tencent has further developed a significant value for shareholders by taking sizable positions in Chinese internet companies such as Pinduoduo, JD.com, and Meituan Dianping, making them more successful by positioning them prominently on the WeChat ecosystem.

Magellan is of the view that the gaming business of Tencent is the biggest and most advantaged worldwide and substantially more robust than its peers, given the benefits it gets from the integration with WeChat.

Besides, Magellan believes that Tencent is ranked 1 or 2 in what is considered to be inherently oligopolistic industries such as digital payments, cloud computing, online music and online video where elements like scale, ability to invest upfront, and first-mover advantage are critical.

During the pandemic, Chinese digital business models and technologies have played an essential role in reducing the propagation of COVID-19 and diverting the social and business impact of the pandemic.