The a2 Milk Company Limited (ASX: A2M, NZX: ATM) has appointed new Managing Director and CEO David Bortolussi. Mr Bortolussi, who will be based out of Sydney office, is anticipated to start working with the company from early 2021 calendar year, as he has a six-month notice period with the current employer. Mr Bortolussi will replace Geoffrey Babidge for the permanent MD and CEO position, who has been managing the CEO role on an interim basis since December 2019.

The a2 Milk Company’s market update highlighted Mr Bortolussi’s many strengths including extensive international leadership experience in the consumer and retail sector, making him a well-suited person to lead the company. With a focus on brand development and innovation, he has been mainly engaged in corporate strategy and business transformation, multichannel management and supply chain operations.

In a detailed statement, the a2 Milk Board also expressed thanks to Mr Babidge for stepping back into the business after the departure of former Managing Director & CEO Jayne Hrdlicka. Mr Babidge, former CEO, returned to the job in December 2019 as interim CEO. He led the company from 2010 to 2018 and is applauded for turning the company into a multi-billion-dollar operation.

Mr Bortolussi is currently positioned as Group President at International Innerwear, HanesBrands. In 2009, he joined Pacific Brands as Chief Financial & Operating Officer and took over as CEO in 2014. During his long stint at Pacific Brands, he restructured and transformed the business into a brand focused company. Over the past five years, he led the company into an omni-channel retailer with successful wholesale partnerships and delivered double-digit compound annual growth in sales and earnings.

HanesBrands acquired Pacific Brands in 2016, and Mr Bortolussi’s role was expanded to cover Australasia and outside of the Americas to manage international innerwear operations. During this period, he had extensive exposure to Asian sourcing markets, particularly China, as he also monitored various brand distribution partnerships for the Asian region.

Also read: Do not miss! 5 Reasons to look for growth stocks on NZX

Before this, Mr Bortolussi served as Chief Strategy Officer at Foster’s Group for a five-year period. His responsibilities at Foster’s Group covered activities concerning corporate strategy, mergers & acquisitions, business development and performance improvement. In this role, he was instrumental in leading various strategies while generating significant shareholder value. Prior to Foster’s Group, he held senior consulting positions at McKinsey & Company and PricewaterhouseCoopers (PwC).

As a2 Milk is going through a period of continued strong growth in dynamic markets, appointment of David Bortolussi boasting a strong and diverse skill set coupled with comprehensive strategic and operational experience as new MD & CEO is expected to serve the company well.

Let us have a look at the company and its latest announcements:

About The a2 Milk Company - a2 Milk is sold mostly in Australia and New Zealand but China and the United States are also its primary markets. The company commercialises intellectual property, which produces A1 protein-free milk sold under the a2 Milk™ brand. The company also offers milk and related products in its kitty like infant formula.

The company was founded in New Zealand in 2000 by Dr Corrie McLaughlan and business partner Howard Paterson. Currently, Australia is its most well-established market, where the company is strongly focusing since 2007.

Canadian Market Expansion - In March 2020, the company expanded its footprints in the Canadian market after entering an exclusive licensing agreement with Agrifoods Cooperative, for a2 Milk™ branded liquid milk’s production, sale, marketing and distribution.

FY20 Outlook – On the back of increased levels of marketing investment in China and the US, the company expects ongoing revenue growth across its key markets for FY20. Revenue for the period is expected in the range of $1,700 million to $1,750 million, while EBITDA margin is anticipated at 31-32%. 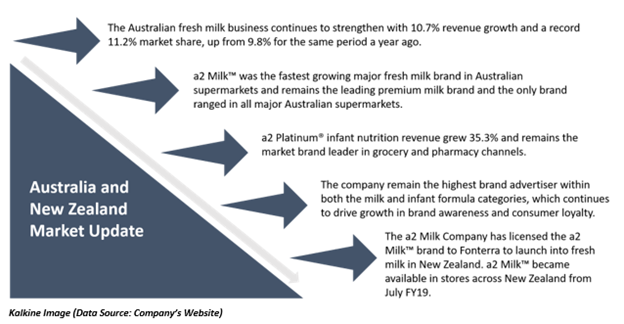