Leading pharmaceutical wholesaler and distributor, Sigma Healthcare Limited (ASX: SIG) has been reviewing its entire operations and organisational structure to identify opportunities to enhance its future. On 15 May 2019, the company held its Annual general meeting (AGM) at which the company discussed the important business decision that it took in FY18.

The second major event during the year was the merger proposal put forward by Australian Pharmaceutical Industries, or API. In February 2019, the company declined the indicative non-binding offer put forward by API as the company believed that it was not representing fair value and was not in the best interests of its shareholders.

During the year the announced a major transformation program – Project Pivot – which has identified over $100 million of efficiency gains to be achieved over the next two years.

During the year the company’s Discount Drug Stores brand launched a new differentiated pharmacy model called Whole Life Pharmacy and Health Foods which provides a retail pharmacy environment with a significant focus on wellness and range of foods and products. There are nine of these now operating, with six in Queensland, two in Western Australia and one in New South Wales with plans to expand the roll out from 2019 July.

The company is also launching the new Amcal+ Life Clinic which expands health services provided in the community, including extensive consultation suites to incorporate allied health services. The first concept store is currently getting constructed in Burwood in Victoria and is expected to be fully operating within eight weeks. Further, the company is actively pursuing opportunities in the provision of third-party logistics services, commonly known as 3PL and 4PL services.

In FY 2018, the company reported total Revenue of $3.97 billion, down by 2.9% on pcp, mainly reflecting the reduction in high value but low margin Hepatitis C product. Excluding that impact, Sales Revenue was up 2.9% to $3.75 billion.

Further, the company reported Underlying Net Profit after Tax of $46.3 million, down by $46.3 million on pcp, impacted by additional rebates and higher interest expense and depreciation relating to the company’s significant investment in new Distribution Centres. 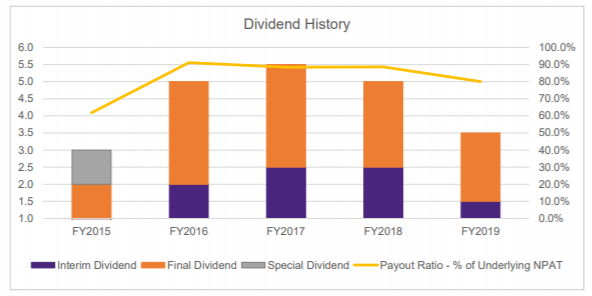