Seven West Media Limited (ASX: SWM) is into the multi-platform media business. The company has a market-leading presence in the television business, as well as in publishing and online. The company is based out of Australia, and its headquarters are in Perth. SWM’s operations include a television network, magazines, newspapers, radio, and the internet. The company’s strategy for the present and future is to expand its leadership to produce content across all screens.

On 21st May 2019, the company announced an update on its business. The company is expecting the underlying EBIT to be between the range of $210 million to $220 million for the year ending 30th June 2019. This was $235.6 million in the previous year. It further advised that the year’s Group net cost reduction would be at the top end of the range between $30 million to $40 million.

The company had grown its revenue share this year, which is inclusive of a 41.3% share of the metro FTA market and a 42.5% share of the BVOD market. Though, the recent guidance has depicted soft conditions and short market experience in the advertising sector. Besides this, there is economic uncertainty due to the Federal Election.

The company, however, is set to transform its business in speed and out-deliver on its cost-savings and investing in the major growth prospective areas. The company believes that Seven studios would obtain strong EBIT growth, whereas 7Plus would grow its revenue beyond 40% in this financial year.

The company is focussed on bettering the flexibility of its balance sheet. It added in the update that, in this year, it would reduce the net debt by approximately $75 million.

In April, SWM notified that the sale of the company’s 50% interest in Yahoo7 had been finalised to Verizon Media. The company thus has 100% control of its brands and assets online.

The underlying EBIT for the half was $147m, a decline of 7.9%. The Underlying NPAT amounted to $91.8m. The total group revenue and other income worth $798 million was down by 1.5%. At the end of FY19, the company had targeted for the leverage ratio reduction below 2x.

The company’s net debt reduced by $121m to $590m. On the cash flow side, for this period, the company had an operating cashflow totalling to $84.8 million. 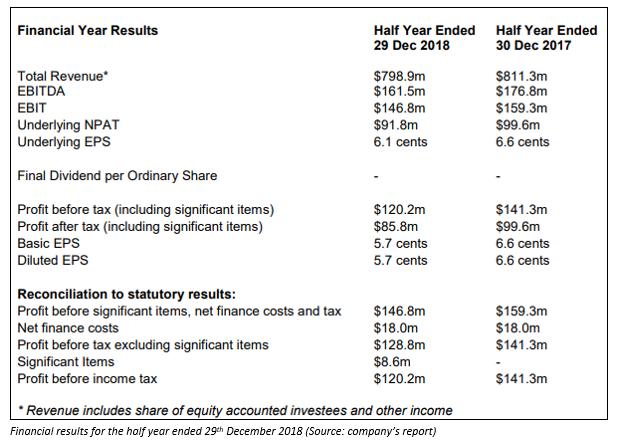