Saturn Metals Limited (ASX: STN), operates as a mineral exploration company with a focus on the evaluation and development of gold deposits across the Australian region.

On 15th May 2019, the company announced that it had received firm commitments to raise $1.5 million (before costs) to expedite the drilling and resource definition at its 100%-owned Apollo Hill Gold Project located ~60km south-east of Leonora in the heart of WA’s Goldfields region. 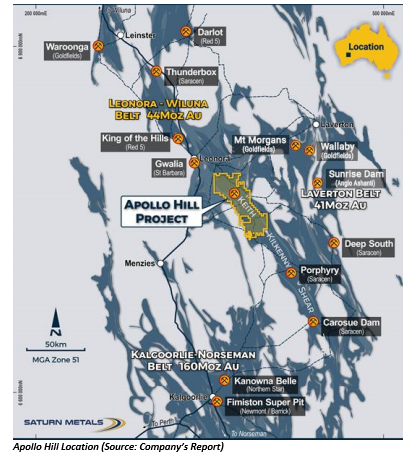 The placement involved the issue of around 7.14 million new fully paid ordinary shares at a price of 21 cents per share, representing a 9% discount to Saturn’s five-day volume weighted average price, and was strongly supported by professional investors. The acting Lead Manager to the Placement was Patersons Securities Limited.

The proceeds of the placement, together with the existing cash balance of $ 2.838 million as on 31st March 2019, would be utilised to aggressively fund and accelerate the follow up drilling geared towards delivering the next upgrade of the Apollo Hill Mineral Resource, which currently stands at 20.7 million tonnes grading 1.0 g/t Au for 685,000 ounces of gold. 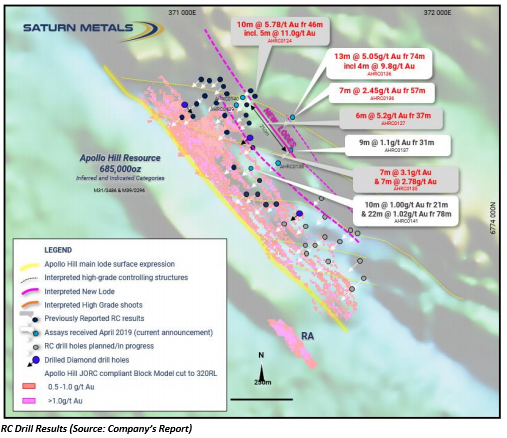 Currently, assays are pending for 18 recently finished RC and Diamond holes with results due to be disclosed in the upcoming weeks. Besides, 1,800 m, 60-hole regional aircore drilling program is also due for completion in the coming days.

Recently, Saturn Metals also received a grant of $35,000 in the last round of the West Australian Government's Exploration Incentive Scheme.