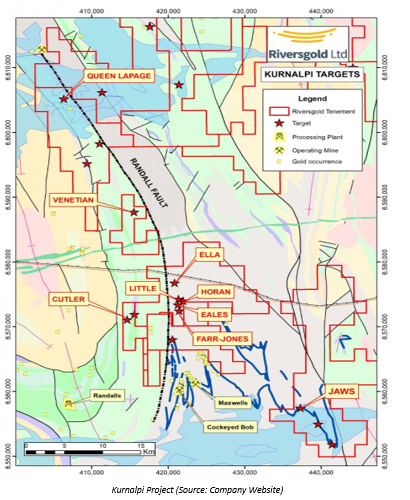 With the settlement in place, Mr Kelly would withdraw the statutory demand lodged by him and the proceedings to set the demand aside will be discontinued.

On 28th May 2019 Riversgold announced the exchange that the company has received firm commitment from sophisticated investors to raise approximately A$218,000. The company intends to use the funds raised for working capital purposes. It intends to issue 9.93 million fully paid ordinary shares at A$0.022.

On 16th May 2019, the company reported on results from its Little gold prospect.

On 6th January 2019, the company announced the discovery of unexpected multiple gold deposits At Farr-Jones.

Riversgold Limited was listed on the ASX in October 2017, at A$0.24, and since listing, the stock price has been falling setting a clear downtrend. The biggest fall in price was witnessed on the listing week itself, with the stock closing down by more than 16% from its listing price.

Post the weak listing, the selling pressure did not subside, and the stock kept on sliding, finding no major support in between. The downward move has thrown the stock to the current price of A$0.021 as of (31th May 2019) which accounts for a massive fall of more than 90% from the listing price.

However, there is a positive development in the stock price pattern. If the weekly chart is to be analysed, then once can see the formation of a falling wedge pattern.

Falling wedge is a bullish reversal chart pattern that is formed during a downtrend. In the falling wedge pattern, the prices trend down in a narrowing range (depicting the current downtrend). Upon joining the swing highs and the swing lows, two falling trendlines can be constructed.

At the lowest point where both trendlines are about to meet, the stock is expected to give a breakout on the upside. However, there is no hard and fast rule, and the stock could even break below its lower trendline.

In the case of Riversgold, the stock has almost reached its breakout point, but still, no bullish activity is seen on the chart.