In this article, we would discuss two stocks with exposure to Gold and Cobalt minerals. These two stocks had recently released updates related to their operations, incentive and a potential sale of a project. Let’s look at these two stocks from Energy and Metals & Mining group:

Twenty Seven Company Limited (ASX: TSC) is focused on the exploration of cobalt in highly prospective areas. The company has released two announcements on 02 July 2019 with regards to the prospective gold strike and Junior Minerals Exploration incentive.

Reportedly, the geology team has carried on an additional analysis of legacy literature and drilling campaign inside the tenure, and it is subject to further investigation; however, there is a strong indication for multiple anomalies along strike between Creasey 1 and south-east to the re-named Creasey 2. 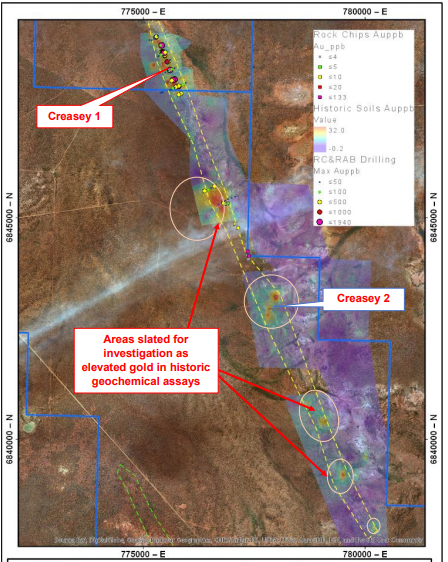 The company considers the prospective gold strike in high priorities backed by the several factors including the improvement sentiments on gold with trading price >A$2,000; the mining infrastructure appears highly efficient along with third-party processors providing end-to-end solution to deliver the product to the market. One more important factor has been the unearthing of the underexplored 12Km prospective gold strike on the eastern boundary, which depicts exploration upside.

According to the release, due to a rising favourable global macro backdrop for gold, the company is revising the plans to visit the site. Also, once logistics are finalised, the geology team expects to visit the site in the early 3Q 2019. Further, the next site visit would be focused on Creasey 2, including the areas along strike that displays gold raised readings derived from legacy geochemistry assays. Moreover, after extended infill mapping and further rock-soil sampling, the geology team would have additional data to formulate the inaugural drill targets for testing.

Reportedly, the geology team’s visit in April 2019 discovered some data points that can be used to improve the understanding of 12km prospective gold strike. Also, the objective to enlarge the Rover Project was to capture the northern extension of Maryland Hills & Cook Well Archean greenstone belts, which includes Creasey 1. Further, the geology team identified Creasey 2 as a target because of increased gold readings and the significant fault which defines 12km of the prospective strike in Creasey 1.

It was reported that previously undertook drilling campaign at Creasey 1 had traced gold mineralisation for ~1,200m along strike, and gold at shallow depths was intersected in six drills:

The company intends to finalise the visit to the Rover Project to follow-up on gold anomalies between Creasey 1 and along strike to Creasey 2 and focus on the testing and identification of additional prospective area along the 12km strike extent.

On 02 July 2019, TSC reported that the Australian Taxation Office (ATO) had accepted its application to participate in the Junior Minerals Exploration Incentive (JMEI) scheme for the 2019/20 income year. According to the release, ATO confirmed that TSC was successful in its application for $345,000 JMEI credits for the 2019/20 year. Further, the eligibility criteria enumerate that the shareholders who acquired new TSC shares during the period 1 July 2019 and 30 June 2020 (eligibility period) would be entitled to receive JMEI credits.

It was reported that the credits entitled to the shareholder would be dependent on numerous factors, which includes the total number of new shares issued between eligibility period, the actual amount of allowable exploration incurred by TSC in 2019/20 financial year, TSC tax losses for the 2019/20 financial year and each shareholder’s individual financial circumstance.

On 02 July 2019, Focus Minerals Limited announced that a three-month extension of the Exclusivity Deed was signed with Intermin Resources Limited (ASX: IRC) for the proposed sale of the Coolgardie Gold Project (Coolgardie) for A$40 million in cash and Intermin shares payable over 3.5 years. 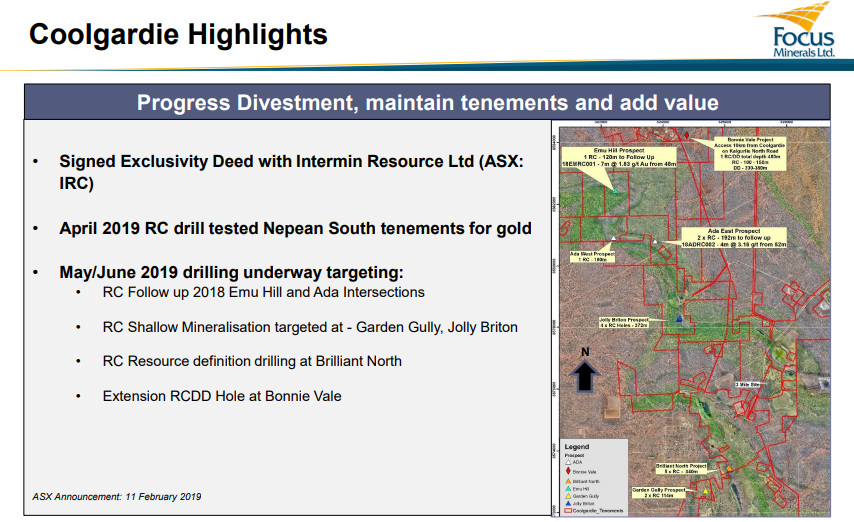 Meanwhile, Focus is engaged to establish high-quality, long life operations at the Laverton Gold Project, and the company is currently undertaking a reverse circulation (RC) programme to improve the gold resource of the company.

Focus Minerals also updated the announcement made by Intermin Resources with respect to the extension of exclusivity deed. Further, some background of the Project was described in the announcement and information related to the transaction of the Coolgardie Gold Project.

In March 2019, Focus gave an update pertaining to the sale of the Coolgardie Gold Project after an article published in media. According to the release, to finalise all documentation and acquiring all necessary approvals in relation to the transaction; the exclusivity agreement included a five-month exclusivity period for both companies. Further, the company clarified that no binding sale agreement was signed by that time, and both the companies were working collaboratively to finalise the transaction.