Clinical-Stage oncology company, Prescient Therapeutics Limited (ASX: PTX) bases the foundation of its business model on the ground-breaking technology that addresses the mutations causing cancer. The companyâs mainstream operations are focused on the development of novel drugs that have the potential to bring forth new promising therapies in the treatment of a range of challenging cancers with significant unmet need.

Prescient confirms the backing of one of the deepest clinical pipelines with two lead drugs that turn off âmaster switchesâ that are known to drive cancer. The drugs include PTX-200 and PTX 100; both focused on inhibiting the survival pathways of growth molecules that have shown resistance to front line chemotherapy and remain the key source in the development and evolution of cancerous cells in the human body. 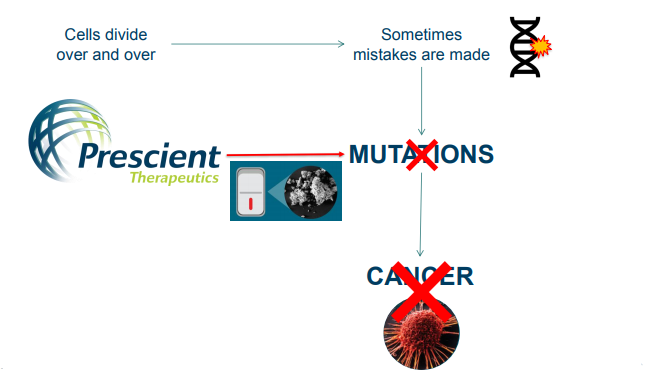 Prescient believes that âPeople are not the same and nor are tumoursâ, thereby touching upon the most serious problem of drug offerings based on one-size-fits-all, prevailing in the healthcare industry. The business objective of the group is,therefore, driven by its aim to deliver the precision medicines with targeted personalised therapy that hit the driving source of that specific tumour in the patient.

Prescient eyes significant opportunity in personalised therapies for cancer, which is forecasted to grow to US$93B by 2023. Prescient also receives the backing from life-science focussed funds in the US and Australia and has collaborations with leading clinicians and hospitals.

Among many forms of cancers, Prescient initially aims at the very common breast and ovarian cancer by the formulation of PTX-200. PTX-200 is currently used in three clinical trials that include the treatment of acute myeloid leukemia, HER2 negative breast cancer, and ovarian cancer. PTX 100 has completed Phase 1 study in solid tumors; now pursuing a transformative opportunity in RAS and RHO mutant cancers.

Prescientâs lead drug candidate, PTX-200 is a novel PH domain inhibitor that constrains an important tumor survival pathway known as Akt, that plays a vital role in the development of many cancers, including leukemia, ovarian and breast cancer.

Prescient was recently granted a new patent covering PTX-200 in Canada. This provides intellectual property protection until 2028 to Prescient with respect to the compositions of PTX-200 with taxanes and platinum compounds for cancer treatment.

The drug development outlines the successful completion of the Phase 1b trial, which has shown encouraging response rate (twice the expected) with safety endpoints being met. It is currently undergoing Phase 2 trial at the prestigious Montefiore Cancer Center in New York and Floridaâs H. Lee Moffitt Cancer Center.

PTXâ second novel drug candidate PTX-100 addresses solid tumours in which certain mutations lead to growth signals. PTX-100 is a first in class drug candidate that has the potential to block the growth of one of the most damaging cancer enzymes known as geranylgeranyl transferase-1 (GGT-1). This drug candidate prevents the activation of Rac, Rho, and Ral circuits in cancer cells, leading to apoptosis (death) of cancer cells. 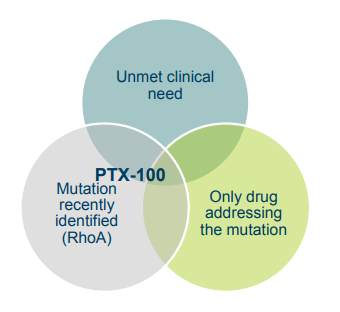 PTX-100 has completed Phase 1 trial in advanced solid tumours, demonstrating safety and disease stabilisation. The company believes in the PTX-100 ability to be the only clinical stage RhoA inhibitor in global clinical development. The company has planned to start a PK/PD basket study by Q2 2019, regarding solid malignancies and hematological using PTX-100, targeting cancers with RhoA and Ras mutations.

Financial Position: During the quarter ended 31 March 2019, Prescient received the tax refund of A$939,423 from an Australian Government Research and Development. This contributed to the companyâs cash reserves of A$4.68 million as at the end of the quarter, including the receipt of A$1.77 million before costs from the Tranche 1 of placement.

Stock Performance: Listed under the healthcare industry, PTX is currently trading at A$0.039 (as at 2:40 PM AEST, 2 July 2019). The market capitalisation of the company stands at $15.38 million with 394.26 million shares outstanding on ASX.