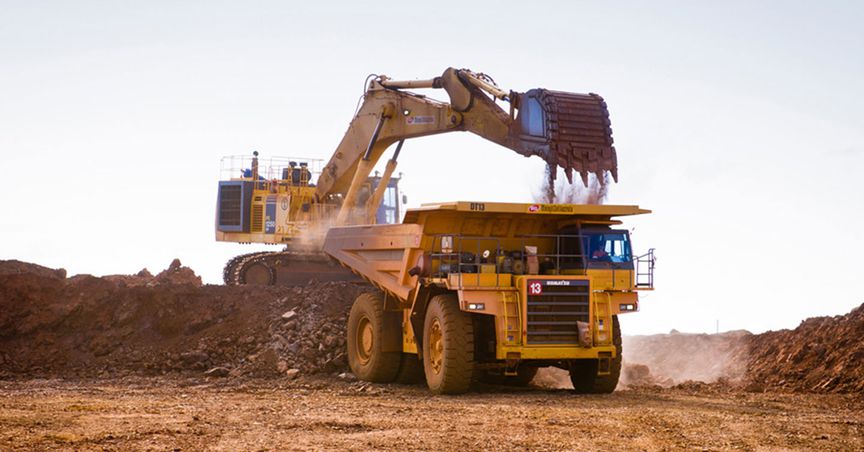 The Nebo-Babel deposits were prioritised among others and underwent the pre-feasibility study, highlighting 22 years of ore supply from the maiden reserves and 26 years of total life of mine.

OZ Minerals, in October 2016, signed a farm-in agreement for the joint venture with Cassini Resources for the project, with OZL earning a 70% equity stake in the project in April 2019 by contributing $36 million towards the PFS and regional exploration. The spending on the project has been in excess of $50 million to date and involved drilling covering more than 170,000m, which assisted to several phases of metallurgical testing and estimation of the maiden ore reserves.

2020: An Exciting Year for Cassini Resources: Must Read

The prospects included in the West Musgrave Project are as follows, with Nebo-Babel on priority for development-

The maiden reserves as of 11 February 2020 for Nebo-Babel deposits have been estimated at 220 million tonnes of ore with a grade of 0.33% Nickel, 0.36% Copper, 120 ppm Cobalt and several other precious metals. The Mineral Resource within the final pit design was converted to Ore Reserves by applying a Net Smelter Return (NSR) cut-off value of $28/t ore.

The Pre-Feasibility Study recommends open pit mining operations with approximately 31 million tonnes of pre-stripping and stockpiling during the initial period, followed by mining at a rate of approximately 34 Mtpa for the first 5 years.

The mine operating period includes the half-year of pre-stripping and stockpiling followed by the resumption of mining for the next 26 years at the Nebo-Babel site with an average life of mine strip ratio of 3.3.

The strip ratio minimises the cost towards waste handling and mining of the overburden. The LOM average mining cost is estimated at $12.70 per tonne of ore mined. Multiple pits will be operated in sequences and as per the mine production schedule. 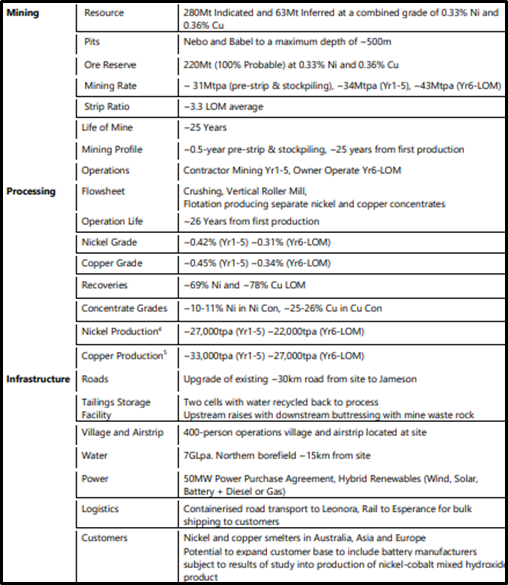 The shallow mineralisation at the Babel and Nebo deposits allows the extraction of the ores via open pit mining methods, therefore reducing the capital expenditure and mining cost as against a conventional underground operation.

The ore from the mine site would be sent to the processing plant with a head grade of 0.42% Nickel and 0.45% Copper during the first 5 years. The processing plant would follow Crushing, Vertical Roller Mill, Flotation beneficiation with separate Nickel and Copper concentrates. The plant would produce an average of 27 kilotonnes a year of Nickel and 33 kilotonnes a year of Copper during the first 5 years of operation.

The initial upfront project capital expenditure has been estimated at $995 Million and complied, with the help of particularly, Australian Mining Consultants (AMC) for mining costs and GR Engineering Services (GRES) for process plant and elements of the infrastructure costs.

The existing infrastructure on-site is sufficient for exploration activities and would require upgrades for the operation phase. The access to the mining and processing site would be via public roads to Jameson and also via a feasible proposed new approximately 30km long road from Jameson to site.

The base case assumes the power supply via a hybrid diesel-solar-wind power station and the purchase of power under a power purchase agreement arrangement. An aerodrome with sealed strip and associated facilities has been proposed and included in the study for the capital requirement estimates.

The average life of mine operating cost stands at $34.3 per tonnes of ore, with $12.70 and $13.90 a tonne per ore accounting to mining and processing operating expenditures, respectively. Nebo-Babel is a potential low-cost operation at 21st percentile on comparison with the global nickel producers.

The low-cost operations are primarily due to low mining costs and would be complemented by substantial by-product credits on implementation of innovative, low power, processing solutions, saving Cassini & partners millions in the long run. The long life of the mine would provide an uninterrupted supply of the feed ores for stable operations, and the proposed renewable power source would minimise the carbon footprint of the project.

Cassini would be required to contribute the attributable share (30% of $995 million) towards the pre-production capital, once the final investment decision is made. The project would be followed by a bankable feasibility study and would continue to explore the already identified regions. Cassini has already engaged in negotiations with multiple potential funders to secure investment for the project.

As the study didn’t cover deposits or exploration prospects within the broader JV project area, the Company assumes that there are defined opportunities that can add additional value over time through further exploration and development activities across the 9,500km2 West Musgrave Province.