Parkway Minerals is gaining momentum on stock exchange, impressing the investors with its acquisition driven growth strategy with the takeover of Consolidated Potash Corporation Ltd (CPC).

The acquisition update pushed Parkway Minerals’ stock in the green zone. PWN has surged up 20.00% in a past 5 days to $0.007 as at 21 August 2019, with the last three months performance flagging a growth of 50.00% in the stock price. With continued strong investor sentiments, the stock skyrocketed by 16.7% by the close of market trading today.

Parkway controls strategically located resources capable of supplying two of the three most critical macro-fertilisers – phosphorous and potassium. The future of fertiliser industry is dependent on population growth. As per the company, with the increase in global population, the proportion of arable land per person is expected to decline, which implies more food will have to be produced from smaller areas. Thus, improvements in food production and the food supply chain as a whole are imperative if malnutrition is to be reduced and quality of life maintained worldwide. Fertilisers represent one of the most cost-effective means of achieving this.

Let’s have a hawk-eye over the projects and technology portfolio of this Australian materials sector player, Parkway.

Lake Seabrook: Parkway’s 100%-owned, Lake Seabrook Potash Brine Project is a salt lake located about 450km northeast of Perth in the region of Yilgarn, Western Australia. The project overlies the basement of greenstone rocks of Archaen age, and consists of five exploration licenses with the salt lake. 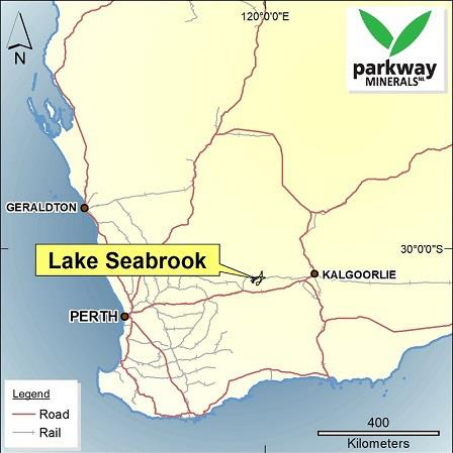 During the quarter ended 30 June 2019, Parkway reported encouraging brine assays of more than 4,000mg/L potassium from the surface brine samples collected from shallow pits dug on the surface of the lake.

The company plans to target paleochannels within a body of the lake that are likely to have high concentrations of potassium mineralisation. This exploration model of the company is almost similar to other salt lake potash explorers within Western Australia.

Should the Parkway’s exploration efforts be successful at Lake Seabrook, the project possess a likely potential to reduce costs to any future operation due to a significant infrastructure base including its proximity to the Perth-Kalgoorlie rail line. 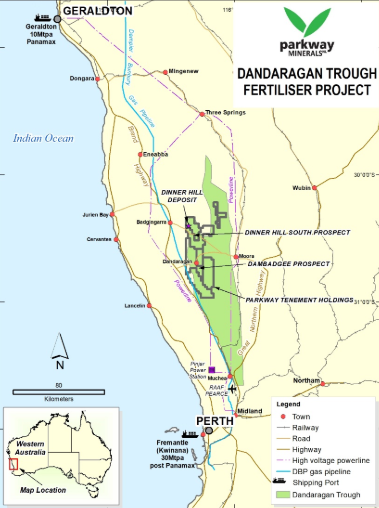 Parkway holds major land holding in this globally recognised greensand deposit, with exploration licenses and applications covering an area of 2,00km2. Although greensand is an unconventional source of fertiliser products, appropriate processing technology has the potential to unlock vast resources. This technology is called K-Max® process that is 100% owned by Parkway Minerals.

PWN’s intellectual property ownership of the K-Max® process unlocks the valuable elements that exist within the vast glauconite deposits of the Dandaragan Trough. Parkway’s patented K-Max® process uses hot sulphuric acid to leach glauconite at atmospheric pressure, extracting potassium and other elements to make a range of products, including sulphate of potash (SOP) high magnesium SOP, (KMS), phosphoric acid, aluminium sulphate (alum), iron oxide as well as other mica-like minerals, such as phlogopite.

SOP is a premium product that enjoys a significant and increasing margin over the more commonly traded potassium chloride (MOP); and demand for SOP is increasing. Meanwhile, phosphate can be recovered from the same greensand deposits by more conventional means.

Dandaragan Trough has access to fertiliser blending operations and the established agricultural industries of the nearby Wheatbelt region. Parkway believes that Dandaragan Trough enjoys fundamental cost advantages to delivery into the local and Asian markets.

Davenport owns two exploration licences and three mining licences in the South Harz region of central Germany, which is considered as a well-established area for the production of potash. Parkway’s shareholding in Davenport potentially provides an opportunity for the company to reach out to European market more efficiently than it would have achieved from its Western Australian projects alone.

Davenport Resources got listed on the Australian Securities Exchange in January 2017 as a metals and mining sector player. The stock of DAV is trading at $0.050, up 8.696%, by the close of market trading on 21 August 2019.

Business Strategies of Parkway: So far, Parkway has built a strong team of experts, specialising in fertilisers development, and continues to evaluate for synergistic opportunities through mergers and acquisitions in order to strengthen the value of its existing assets portfolio. Parkway remains focused on fertiliser projects that meet the criteria of large-scale, in regions of the world dependent on importing fertiliser products with existing and robust export infrastructure and low sovereign risk.

As its next move, Parkway plans to complete a further surface sampling on the remaining parts of project area at Lake Seabrook, besides taking up discussions with third parties on project arrangements.