On 30 April 2019, the company announced its Net Tangible Assets & Monthly Investment Report. The company provided portfolio commentary. It stated that after the tense relation between China and South Korea improved, Hyundai Motors and AmorePacific made positive contributions of 17% and 9% respectively. The decrease in tension between China and South Korea bodes well for both the companies and could have a positive impact on their earnings for the coming couple of years. Hyundai faced a dip in its vehicle demand in China. On the other hand, AmorePacific witnessed less tourists visiting from mainland China.

Other positive news came from Frontier Digital Ventures, up 12%. It recorded a positive cash receipt for the first quarter. 9 out of 14 of its investments generate a revenue worth more than A$1million. Zameen.com is its largest investment and its revenue soared up by 98% year-over-year recording its first ever quarterly profit.

Adding to this were Wynn Resorts and Melco Entertainment. They were up 21% and 11% respectively. Wynn witnessed an interesting month where the company proposed and then dropped the takeover bid for Crown. Besides this, Wynn Resorts received its Boston license confirmed by the Massachusetts Gaming Commission. Encore Boston is set to open June 2019. PAF believes that the market underrates the earning capacity of this particular property.

The monthly NTA reported was as under:

As of 30 April 2019, the portfolio investments of the company and their weightage were as under: 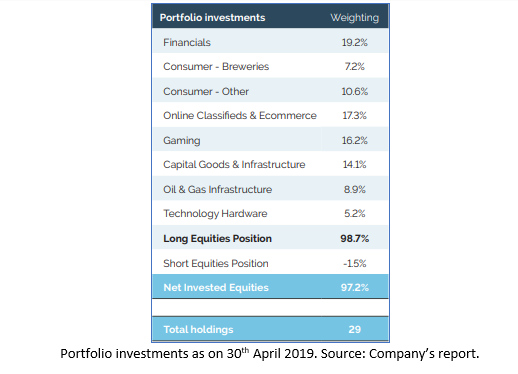 The company also provided its Domicile of Listing. This represents the location of stock exchange listing of each entitiesâ head office. Below is a chart depicting the same: 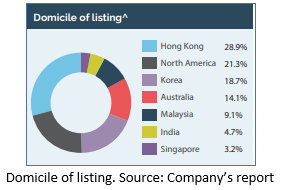