Just around five weeks ago, the company had announced a significant update of the Mineral Resource Estimate for the Sorby Hills, which came on the back of its highly successful Phase II drilling campaign which targeted the Omega and B deposits aiming to increase the resources in the Indicated category.

The updated MRE increased the global resource by 20 per cent to 36 Mt at 4.7 per cent Pb equivalent (3.7 per cent Pb, 39 g/t Ag) and 0.5 per cent Zn. As a result of the continued drilling success, a Phase III drilling program was conducted from October to November 2019. 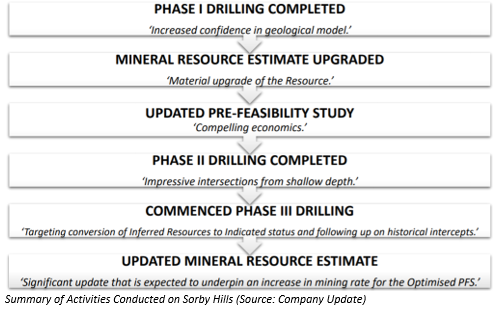 Commenced in the mid of October 2019, Phase III was focussed on improving the confidence as well as expanding the Inferred resources, while also converting existing Inferred resources to Indicated category and following up on historic intercepts. Below are the drilling details:

The drilling campaign was targeting to achieve the following objectives:

Field results from Rock chip logging in favour of Pacifico

Notably, the test holes on the B Deposit indicate strong and continuous mineralisation at shallow depths.

At Omega Deposit eastward extension and infill, the mineralisation follows the sub-surface contours of strata dipping to the east and is located in north-south trending zones on the eastern flank of the Omega Deposit.

While reporting about the Wildcat exploration, the company informed that four shallow (30 m) exploratory holes drilled to the extreme west in the mineralised horizon have intersected mineralisation at shallow depth within the regolith zone. This suggests the possibility of considerable mineralisation discovery. As per Pacifico, this area now represents a first order follow up target for diamond drilling.

In a nutshell, the field observations depict the likelihood of the Phase III drilling to support further conversion of Indicated and Inferred resources to higher classification grades and to substitute Inferred resources whilst building on the potential of new deposits to be found to the west.

Interestingly, with each drilling program conducted by Pacifico since the acquisition of Sorby Hills, the resource base has only expanded (refer below image). 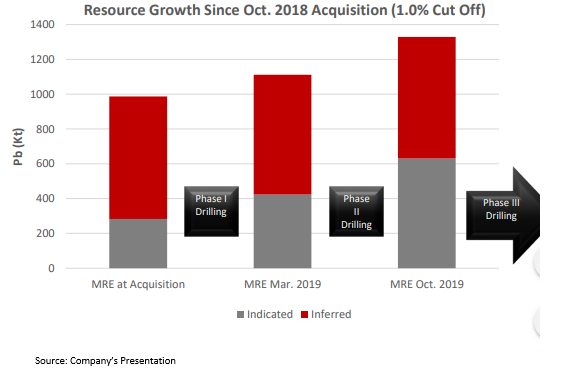 The company has also reported about the successful completion of hydrogeological site investigation program by Pennington Scott, completed between 31 October – 23 November 2019. The program has shed new light on the hydrogeology of the I deposit area based on reanalyzing the dewatering data from a trial decline dewatering in 1981 using modern advanced numerical modelling.

The company is positive of a step improvement in the predictive knowledge of local hydrogeology.

Amidst tough year faced by the junior resource companies, Pacifico has witnessed significant drilling success, further expecting 2020 to be an exciting year of developments.