As announced on 28 October 2019, Pacifico Minerals has commenced its Phase III extensional and exploration drilling campaign at its Sorby Hills Project, following the highly successful Phase II drilling program completed in July 2019. This drilling program is a result of Pacifico’s drilling success and its recently secured funding wherein it completed a $4.6 million capital raising.

From its Phase III drilling program, the company intends to increase confidence and allow for the conversion of Inferred Resources to Indicated Resource status, increase the Inferred Resource inventory and follow up on historic intercepts. To achieve these targets, Pacifico will implement the following strategy: 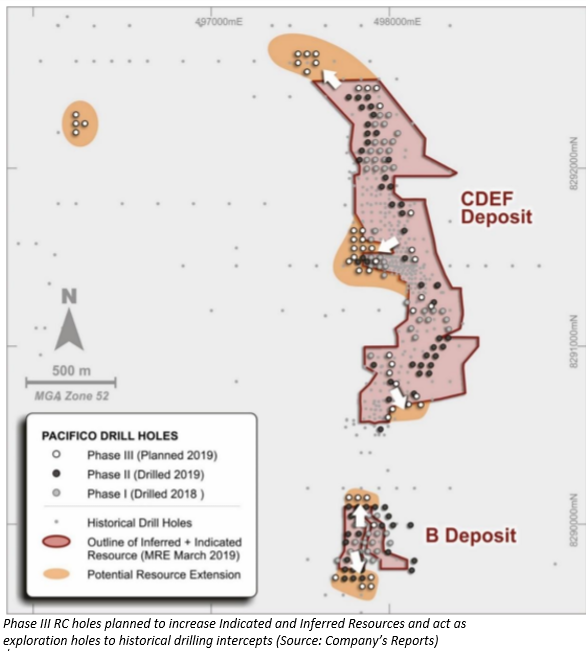 Pacifico Minerals has already conducted a Phase I and Phase II drilling programs at the project, with the project development since its acquisition in 2018, explained below: 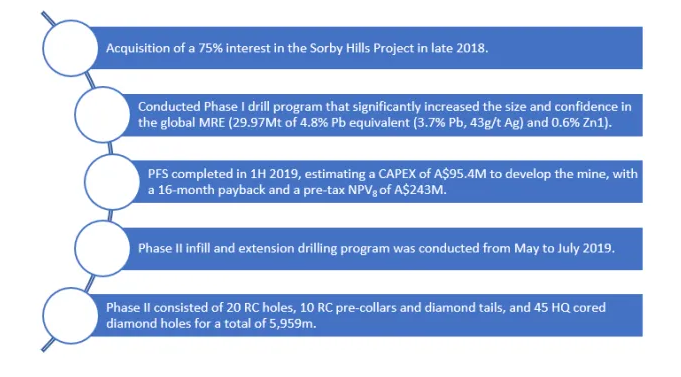 The Phase II drilling program (consisting of 31 RC holes including 11 RC pre-collars drilled holes and diamond tails, and 44 HQ cored diamond holes for a total of 5,959m) was focused on shallow mineralisation above 100m depth that may be mineable by open pit at B and CDEF deposits. Conducted from May to July 2019, the Phase II drilling program provided data for geotechnical (pit wall stability) studies for pit designs and samples for ongoing metallurgical test work.

Till now, the company has recorded various significant drill intercepts from B and CDEF deposits, including:

Final laboratory analyses from Phase II revealed geological continuity of the mineralisation at the CDEF deposit, while the results from the B Deposit indicated major shallow (from 10m) extensions of the Indicated Resource area which remains open to the north and south and is considered likely to link up with A Deposit.

Via its Phase III program, Pacifico will follow up on historic intercepts through exploration of new areas peripheral to the current Resource aiming to increase the global Resource inventory. It is expected that the Phase III drilling will be completed by end-November 2019.

Pacifico believes that it is well positioned to execute ongoing extensional and exploration drilling in parallel with delivering an Optimised Pre-feasibility Q1 2020 with >$5M in cash reserves.