Amid strategic review of the Group, P2P Transport Limited (ASX: P2P) decided to downgrade its earnings guidance for Fiscal 2019. In an announcement dated 24 June 2019, P2P Transport stated that it expects its pro forma underlying EBITDA guidance range for FY2019 to reduce to $5.6 million to $5.7 million relative to the previously announced guidance of $7.8 million to $8.2 million.

The Fleet Manger and taxi owner further announced that it projects its FY19 revenue to settle at the lower end of the previously advised range of $77 million to $80 million. The news sent the investors to press the sell button as the stock declined 3.448% in a morning session to trade at $0.140 (24 June 2019; 12:12 PM AEST).

Why did the company reduce its earnings guidance?

Group’s acquisition driven growth strategy seems to come at a cost! The set back P2P felt in its earnings and revenue guidance broadly explains the one-off costs and non-recurring items relating to recent acquisitions including Non-Stop Media in December 2018. 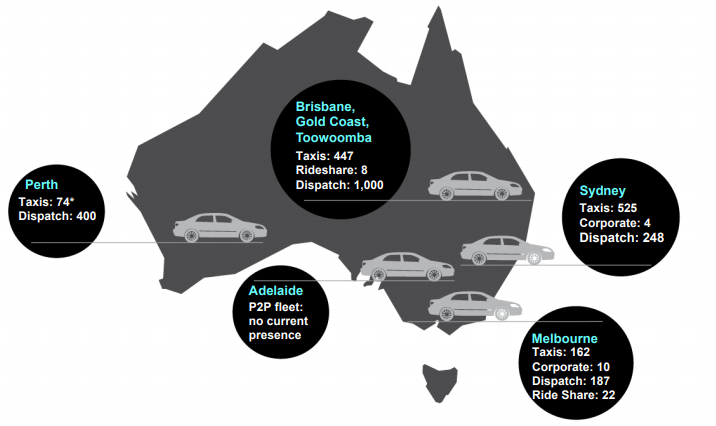 The report read that in the process of strategic review under the stewardship of Interim CEO, Greg Webb, P2P determined that the following items should be included in its FY19 results:

Competitive Headwinds together with traditional business seasonality has intensely disrupted the company’s health further contributing to the downgraded guidance.

From mid-December 2018 to March 2019, P2P encountered major competitive issues in Melbourne and the Gold Coast regions, which resulted in reduced utilisation and revenues for Fleet Services during the March 2019 quarter, particularly in February. The competitive pressure was reportedly a consequence of the Gold Coast cabs restricting services to P2P in the Gold Coast as well as the uniliteral termination of 13Cabs services provided to the group in Melbourne.

P2P, however, immediately addressed the competitive environment with the focus to restore margins through improved utilisation and price recovery in the Gold Coast and Melbourne regions. As a part of corrective action, P2P has now placed a larger portion of its fleet under the Black and White Cabs network, which creates longer term strategic benefits. But in dealing with these competitive issues, the company had to incur certain one-off unplanned costs during the quarter.

P2P remains committed to leverage its platforms to sell additional revenue streams with Adflow being a good example of the group’s capabilities, driven by the group’s ambition to grow this business unit to become one of its largest most profitable business units.

Following the increased competitive environment in Gold Coast and Melbourne, P2P has heightened its focus on the expansion of Black and White Cabs (BWC) network by accelerating the conversion of existing P2P vehicles to primary dispatch. The company believes that this conversion would result in substantial annual cost savings per vehicle going forward through the internalisation of network expenses and would also reduce the P2P’s reliance on external dispatch providers.

The latest update further read that P2P has recommenced the digital tops roll out after resolving the systems battery issues. It now expects all 300 digital tops to be on vehicles and operational by the end of July 2019.

Whilst the company anticipates providing a further business update in late July at the completion of the strategic review of the Group, a range of initiatives have already been identified to improve earnings and cashflow. The company continues to be working closely with and receiving the support of its financing partners.

Management and Board update 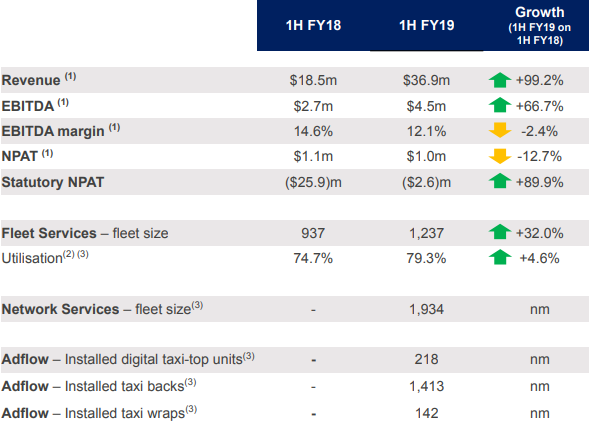 In Q3FY19, the Group reported 65.9% growth in revenue to $16.1 million compared to the previous corresponding period. More interestingly, P2P’s Adflow March 2019 quarter revenue surged up 191% on the previous quarter (Q2 FY19) despite the bleak performance of Digital Taxi Tops (DTT).

There was a net operating cashflow of negative $1.1 million in Q3FY19 compared to the outflow of $1.97 million in Q3FY18. The cash outflow during the quarter broadly reflects the one-off unplanned costs relating to competitive issues. P2P, however, confirmed a stable balance sheet with $1.5 million in cash and cash equivalents and $20 million in net assets as at 31 March 2019.

On the acquisition front, the company recently announced the takeover of CTM fleet and related facilities, reflecting its expansion of geographic footprints in Perth. This acquisition transaction is expected to be completed in April 2019, as per the company’s information. As per 1HFY19 presentation of the company, P2P market share stands at 9.9% in Sydney, 3.8% in Melbourne, 29.8% in Brisbane/ Gold Coast and 22.2% in Perth.