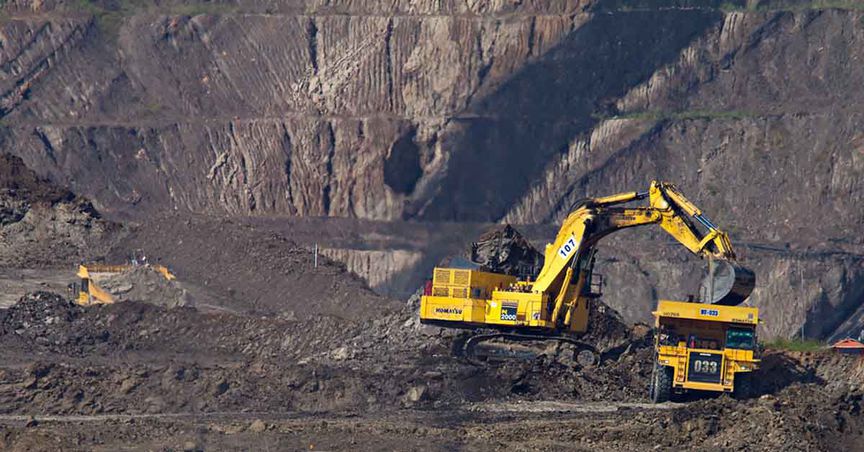 The resource sector is waking shoulder-to-shoulder with the S&P/ASX 200 and demonstrating strong performance. The resource companies on ASX such as OZ Minerals Limited (ASX:OZL) with a market cap of ~ $3.35 billion seems to be strongly positioned to contribute its amount of share in the growth of S&P/ASX 200 Resource Index, by advancing well and developing quality assets such as Musgrave, which is among the Australia’s largest undeveloped copper-nickel deposit.

OZL hopes to develop the Musgrave prospect as a scalable, low-cost, long life, open-pit operation, and the company completed and reported the Pre-Feasibility Study of the prospect, assigning strong NPV and IRR to it; and,

·         The project which is a joint venture between OZL and Cassini Resources Limited (ASX:CZI),  demonstrated a long life of nearly 26 years and presented the foremost development opportunity within the broader West Musgrave province which includes a number of additional highly prospective opportunities including the nearby Succoth copper deposit.

The PFS suggested a Maiden Probable Ore Reserve of 220 million tonnes with an average grade of 0.36 per cent copper and 0.33 per cent nickel, representing nearly 22 years of the ~ 26 years life of mine (LOM), while 4 years of remaining LOM being represented by the combined Indicated and Inferred Mineral Resource.

The PFS now provides the company and its partner a solid platform for engaging with potential lenders and advisors in relation to the funding and structure of the project prior moving to the next phase.

The PFS projected a post-tax NAV of ~ $800 million and a post-tax internal rate of return of ~ 20 per cent with a payback period of six years.

The primary strategy of the company related to the Musgrave deposit is to develop a low-cost mining prospect while setting an example for the global mining industry in terms of community engagement, building partnerships, respect for the environment and the workforce of the future.

The Nebo-Babel deposits were first identified in 2000, and later Cassini acquired the prospect in 2014 and commenced an extensive drilling and study program culminating in a Scoping Study in 2015. OZL entered an agreement with Cassini in 2016 and later acquired 70 per cent stake whilst completing a scoping industry.

Now the JV has moved to PFS, and the comparative performance and return measures of the scoping PFS are as below: 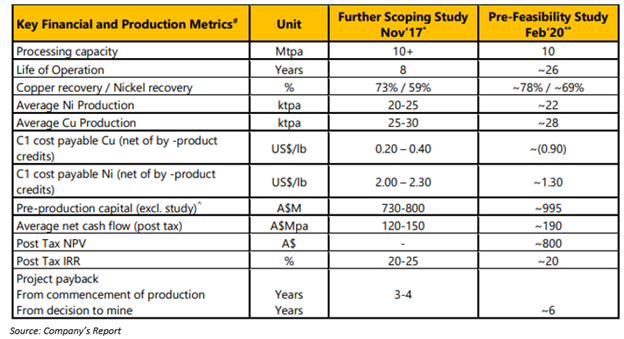 The current exploration of Nebo, Babel, and Succoth deposits within the Musgrave prospect suggested an Indicated Mineral Resource of 280 million tonnes and an Inferred Resource of 63 million tonnes with an average grade of 0.33 per cent nickel and 0.36 per cent copper.

Cost Estimates of the Prospect

As per the base date of October 2019, the cost structure is as below: 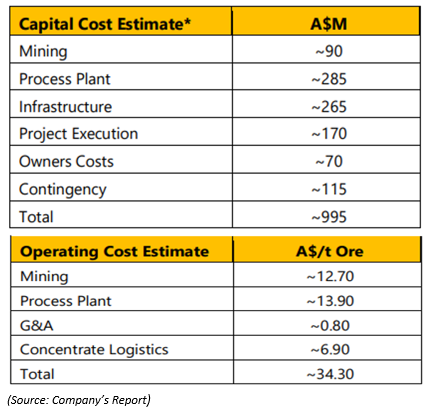 In suggesting the projected NPV and IRR, OZL considered the average price of USD 7.60 for per pound of nickel and USD 2.91 per pound of copper with an exchange rate of 0.67 USD for per AUD.

The 25 per cent sensitivity changes the NPV by 75 per cent both on the lower side and the higher side.

Currently, both Oz Minerals and Cassini are working on potential funding structure,and the company has assumed the availability of funding to support the capital requirement for the development of the project under the PFS.

The company and its partner have completed around 40 studies to assess the environmental impact of the development across the Musgrave prospect, and post considering all the outcomes, OZL had assessed that the environmental risks are considered manageable.

OZL expects the first of the three primary submissions under WA EP Act (Part 4) during the second quarter of the year 2020, and as per the company, the environmental assessment provides a high degree of confidence in obtaining the approval.

Part 5 of the WA EP Act is planned for submission during the second half of the year 2020, and OZL is confident that the prospect would easily get all the required approvals.

The outstanding risk from the August 2019 PFS are as below:

·         Increased Payability of Nickel in Concentrate

As per the company, MHP, which is a precursor material in the production of nickel sulphate for use in batteries, is potentially a significant upside value in processing the nickel sulphide concentrate as MHP is relatively high-grade nickel product which will have reduced transport costs and increased nickel payability relative the sulphide concentrate.