Gold explorer and aspiring developer, Ora Banda Mining Limited (ASX: OBM), based in Perth, Australia has been principally focussed on mineral exploration and evaluation, both open pit and underground gold mining combined with processing activities at its broader Davyhurst Gold Project area. With its relisting on the ASX in June 2019, Ora Banda commenced various resource drilling, detailed mine planning and regional high-impact exploration programs at its large ground package covering a 200-km strike on the greenstone belt located in the highly prolific Eastern Goldfields of Western Australia with regular encouraging updates being released ever since.

Ora Banda’s portfolio features six projects (referring to the figure below) wherein the focus has been mainly on five advance target areas including Riverina, Waihi, Callion, Siberia and Golden Eagle, all hosting a total Resource (JORC 2004) of 9.2 Mt @ 2.8 g/t for 840 koz, very close to the existing Davyhurst Processing Hub (@ 1.2Mtpa). 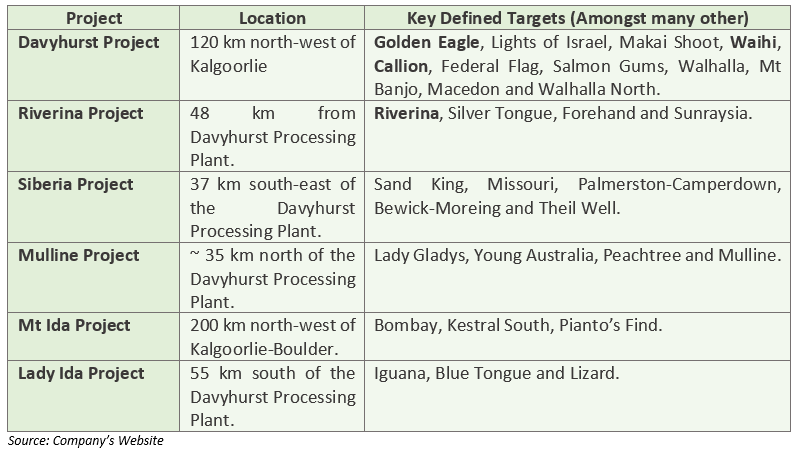 On 30 October 2019, Ora Banda announced that the open pit Mining Reserve at its Siberia Project area had increased from 150,000 oz Au to 210,000 oz Au. The Siberia prospect is located ~39 km south-east of the company’s processing plant at Davyhurst and 80 km north west of Kalgoorlie within the North Eastern Goldfields and incorporates the Missouri and Sand King Open Pits (refer to the figure below). 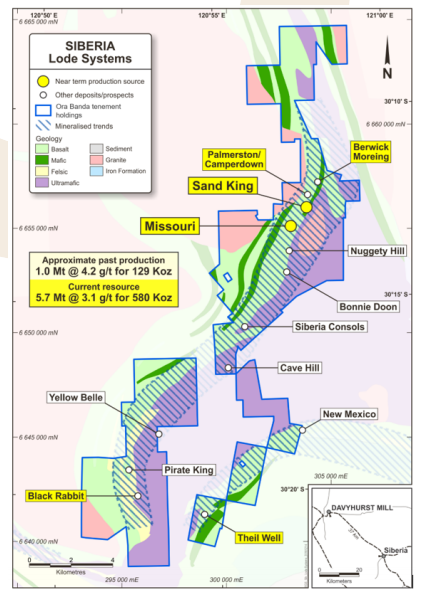 The optimisation and redesign review process resulted in a combined Open Pit Mining Reserve estimate for the Sand King and Missouri deposits of 2,800,000 tonnes at a grade of 2.3 g/t Au for 210,000 ounces Au. Also, the new reserve grade held steady over the 2017 reserve estimate of 2,000,000 tonnes at 2.3 g/t Au for 150,000 ounces which depicted a 42% increase in the open pit Mining Reserve at Siberia and a 43% conversion of Measured & Indicated Mineral Resources to Mining Reserves (up from 30%).

Ora Banda Managing Director, David Quinlivan, commented, “The delivery of this updated Reserve Statement is an essential step in the progression of the DFS. The increase in Reserve is pleasing and augurs well for the integration of these open pits into the larger project scale mining proposition.”

The company has now commenced work to update all the necessary environmental and regulatory approvals for the Siberia Project which were initially granted in 2017. In addition, mine evaluation work investigating the underground mining potential of the two deposits has also begun.

The main Riverina deposit, one of five key priority mining targets at the Davyhurst Project, hosts a Mineral Resource of 2.6 Mt @ 2.5 g/t Au for 205,000 ounces and is at an advanced stage with a high proportion of oxide tonnes defined.

The main mining area within the Riverina deposit holds strike potential of more than 1,000 metres (nearly 300 metres wide). Ora Banda plans to carry out further phased drilling operation in this area in the upcoming months and the results obtained from these drilling campaigns will culminate in the upgraded mineral resource and reserve statement. In addition, the company will also complete a detailed mining study for Riverina, which will be incorporated into the larger Davyhurst Project Definitive Feasibility Study (DFS). 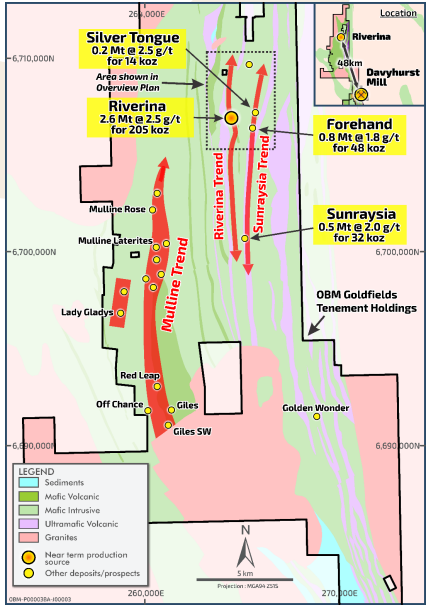 Currently, the geologists at Ora Banda are progressing with the Mineral Resource Estimation update, which is scheduled to be delivered in November 2019. Meanwhile, the planning for Phase 2 drilling at Riverina remains ongoing and the company is well funded to further advance its aggressive drilling programs.