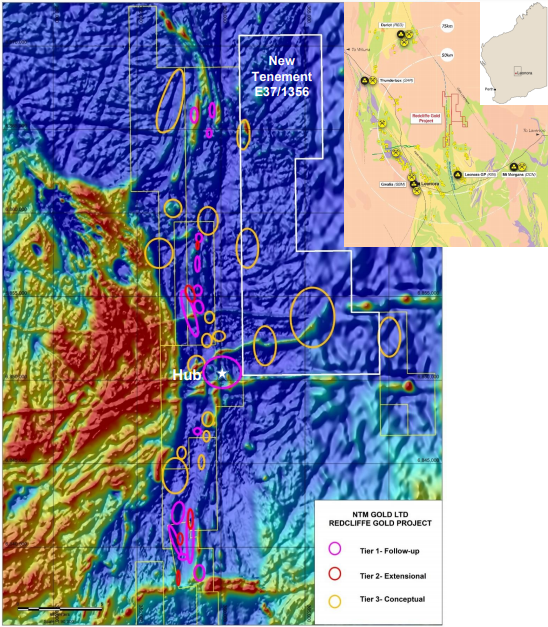 As per the company’s release, following the grant of exploration licence E37/1356, it now expands over 300km2 at its entitled Redcliffe Gold Project. Also, post the completion of preliminary work at E37/1356, several early-stage structural targets would be tested at E37/1356.

Reportedly, the new tenement was granted in May 2019 and included 116km2. As per the interpretation by NTM, it covers granitoid and is adjacent to the eastern side of the greenstone belt and the Mertondale Shear Zone. Also, regional aeromagnetic images in the northern part of the tenement suggests an embayment in the Greenstone belt.

As per the announcement, independent consultant, Dr James Lally, member of Mining Associates evaluated the Redcliffe Gold Project and derived a JORC Compliant Exploration Target for gold mineralisation at Redcliffe:

Also, the target would be tested by NTM in approaching years through the diamond and RC drilling aimed at intersecting depth extensions to existing Mineral Resources. Moreover, RC drilling over poorly tested areas, reconnaissance aircore, resource/infill drilling at known prospects without resources. Most importantly, the exploration target does not include the current Mineral Resource of 12.52Mt @ 1.34g/t for 0.54 Moz.

As per the release, since 2005, NTM and precursor companies has been very successful and cost-effective as reflected post the review of drilling. Also, past drilling at the project witnessed 1,835 holes drilled via RAB, Aircore, RC and Diamond. Furthermore, since 2013, the estimated cost of adding resources is less than $15/oz, the estimated percentage of exploration costs as a proportion of total costs is just under 70%. Importantly, 39% of all holes have intersected at least 1g/t gold.

Post the review of past drilling, NTM asserts that its drilling is efficient and effective, using money wisely, and delivering a high drill success rate. NTM’s assertation is on the back of prospectivity of the project, good understanding of the geology, correctly targeted drill holes and appropriate funding to allow the drilling work, as reported.

Hub, Redcliffe East and Bindy are expected to be priority areas, which may have great potential, reportedly. As per the announcement, several existing deposits and new targets would be tested via aircore to evaluate further strike and depth potential; these targets include untested southern and northern extensions of Hub. Also, the target on E37/1356 need refining before drilling commences and short-term focus remains on the Hub area and the pending results following the recent RC drilling.

The stock of the company closed flat at A$ 0.034 without and further changes, and NTM’s market capitalisation stands at A$ 14 million with 411.8 million shares outstanding. The Year-to-date return of the stock stands at -17.07%.