NRW Holdings reports its operations in three segments, which includes:

Today (on 3rd June 2019), the company’s securities were placed in a trading halt at the request of NWH, pending it releasing an announcement to provide an update to the market regarding NRW’s mining contract with Gascoyne Resources Limited (ASX: GCY).

Recently, on 10th May 2019, NRW Holdings announced that it became a substantial holder in Gascoyne Resources by holding 86,238,410 ordinary shares of GCY with a voting power of 8.58%.

On 1st April 2019, NRW Holdings acknowledged the announcement made by Gascoyne Resources in relation to an equity raising of up to ~$24.4 million (before costs), comprising a ~$3.8 million placement and an underwritten ~$20.6 million entitlements issue.

For the half-year ended 31 December 2018, NRW Holdings reported revenues, including revenue generated by associates of $521.1 million as compared to $345.3 million in the previous corresponding period, mainly driven by increased activity levels in Mining, due to a number of contract awards and the inclusion of Golding results for the full half-year period compared to four months in the previous financial year.

Further, the company reported an EBITDA of $74.3 million, an increase of 85% over pcp. During the half year period, the company’s net earnings increased to $28.2 million due to higher revenues and strong operating performance, particularly in the Mining segment. 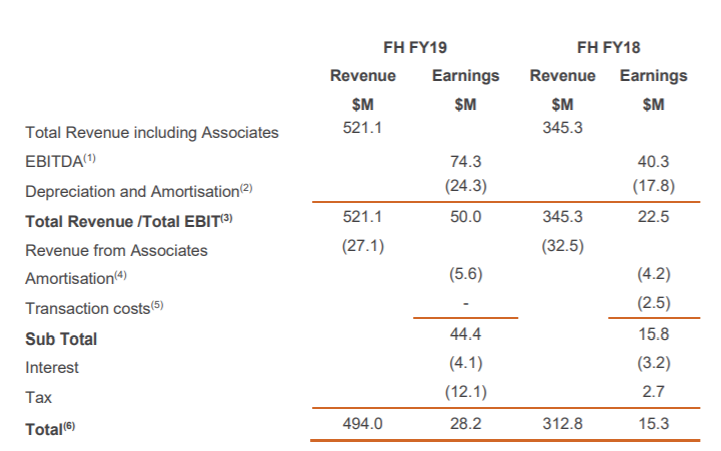 For the half-year period, the Board declared a dividend of 2 cents per share, fully franked. The dividend was paid on 8th May 2019.