Northern Minerals Limited (ASX: NTU), an Australian Stock Exchange listed rare earth minerals explorer, announced on 20 May 2019, that the company has completed a program of Reverse Circulation (RC) drilling, with 17 holes for 1143m at Dazzler and 5 holes from 300m at Iceman prospect. The drilling activity conducted by the company took place at the southeast deposit towards the Iceman prospect, and two infill drill holes at Dazzler prospect.

The company recorded anomalous portable XRF measurement of yttrium from several drill holes, some of which are as follows:

The drill hole identified as BRDR0021, which was extensional in nature recorded 1,109 parts per million of average portable XRF yttrium.

The drill hole identified as BRDR0023, which was infill in nature recorded 2,622 parts per million of average portable XRF yttrium.

The drill hole identified as BRDR0030, which was exploring in nature recorded 1,902 and 1,330 parts per million of average portable XRF yttrium.

The drill hole identified as BRDR0032, which was exploring in nature recorded 1,324 parts per million of average portable XRF yttrium.

The drill hole identified as BRDR0035, which was infill in nature recorded 23,538 and 48,352 parts per million of average portable XRF yttrium.

The drill hole identified as BRDR0036, which was exploring in nature recorded 2,582 parts per million of average portable XRF yttrium. 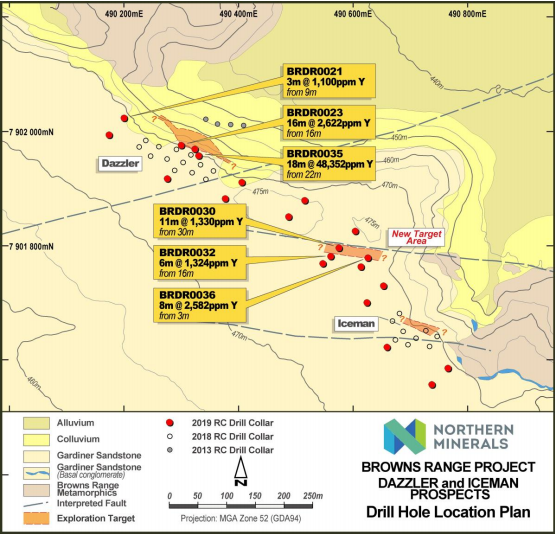 As seen in the above picture, the orange-hued zone marked with questions marks are the areas, where the company plans to drill further, since the RC drilling to the southeast Dazzler and northwest of Iceman (BRD0030, 0032 & 0036) intersect a zone with anomalous portable XRF measurement of yttrium.

However, the company did not receive any significant portable XRF measurements of yttrium from the five Reverse Circulation holes at the Iceman prospect, and it awaits further assay results, which is expected by the company by the end of the current quarter.

The Dazzler deposit, which hosts maiden Inferred Mineral Resources of 144,000 tonnes at a grade of 2.23% TREO comprising 3,200,000 kilograms TREO, is less than 15 kilometres from the Browns Range Pilot Plant on the edge of a small scrap slope. 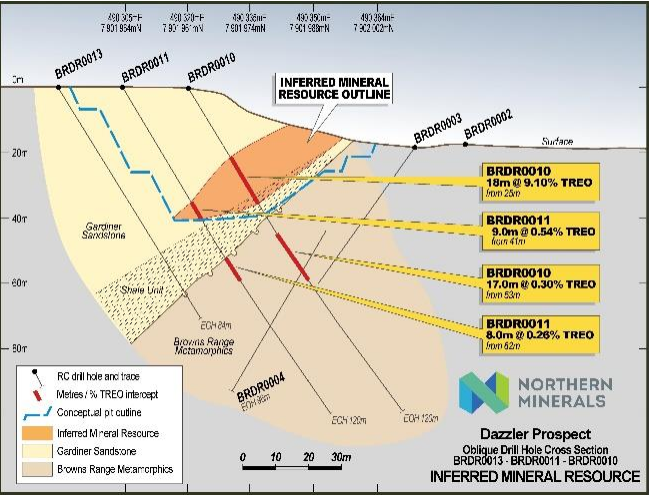 Mr George’s comment further demonstrated that the company is highly inclined to increase the size of Mineral Resources in the area to make it an ore source for many years.

The company further mentioned that Mr Robin Wilson, a member of the Australasian Institute of Mining and Metallurgy had compiled the Exploration results, and he qualifies as a competent person (as per the JORC 2012 edition).