Newfield Resources Limited (ASX: NWF), part of the mining industry, is into the business of diamond development. On May 9 2019, the company announced the initial results and Ore Reserve estimate on the development of Tongo Mine development in Sierra Leone., which is 100% owned by NWF. The Tongo Mine development is situated in the eastern Kenema district of Sierra Leone. A Front-End Engineering Design (FEED) Study was conducted by Paradigm Project Management (Pty) Ltd. In February, to derive these results.

The study found Initial Probable Reserve of 1.1 Mcts from the shallow zones of Kundu and Lando kimberlites. The reserve model has forecasted an 8-year life with peak yearly diamond production of 260,000 carats. The average realised price would be US$222/ct and forecast unit opex, US$115/ct. The study stated that first diamonds could be procured within 12 months of Final Investment Decision.

Detailed mine planning and scheduling have been completed for the Tongo Mine development. Study work is in progress to depict the capacity expansion and optimisation. Along with this, a vast majority of the infrastructure is planned to be built in-house by Newfield.

The FEED Study outlined the detailed life-of-mine schedule consisting of Ore Reserves, Indicated Mineral Resources which are not considered for conversion to Ore Reserves, and Inferred Mineral Resources. Global resource inventory of the Kundu, Lando and Tongo Dyke-1 kimberlites were also included. Newfield, SRK Consulting and Datamine have designed a detailed mine plan for the Tongo Mine development. First production diamonds from Kundu and Lando are scheduled to be realised within 12 months of the commencement of decline development. Total life-of-mine diamond production (Reserves-only schedule) is forecasted at 1.1 Mcts. Peak annual production of approximately 260,000 carats is achieved in Year-5.

NWF has plans to undertake significant further investment in infill drilling of the lower zones of Inferred Resources at both Kundu and Lando. The total capital expenditure estimate for the first three years of development of the Kundu and Lando kimberlites under the Reserves-only schedule is approximately US$29.4m. For the next two years, it is US$23.3m.

Below is the financial analysis summary of the Tongo mine development: 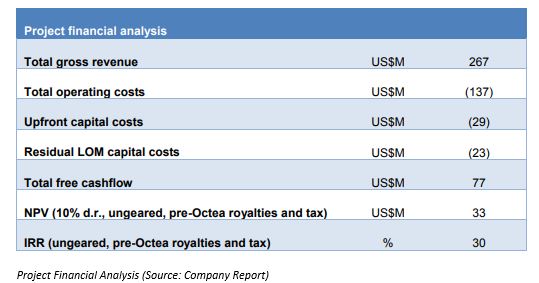 The risks related to the mine development are normal geotechnical and geological risks and global rough diamond price movements. The project has great potential to increase the production capacity, through bringing additional diamond resource to account, as both Kundu and Lando have large-scale Inferred Resource estimates (total of 4.2 Mcts, +1.0mm cut-off). Further, there are nine more kimberlites located within the Tongo Mine development licence area, with a high prospect of diamond deposition. Two of these already have defined Indicated and Inferred resources.

It can be concluded that the Tongo Mine development represents a technically and economically viable project. Strong returns and firm economics can be forecasted for NWF through this development project. Expansion potential paves the way for sustainable growth and other opportunities.