Australia-based New Hope Corporation Limited (ASX: NHC) is a company engaged in the production of thermal coal and also holds interest in logistics and infrastructure operations in Australia.

Recently on 28 May 2019, the company released its Quarterly Activities Report for the period ended 30 April 2019.

During the period, on the safety performance front, all the New Hope personnel continued to focus on hazard awareness and risk management across the business. Besides, for March 2019, the company achieved a full month without a recordable injury or a high potential incident. The trend continued in April 2019 and the personnel would consistently make efforts to maintain the improving trend. 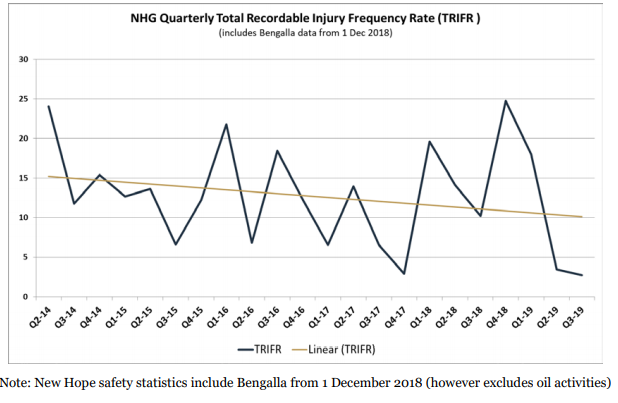 For the QLD Coal Operations, the total coal production was slightly above the prior comparative quarter. The figures are tabulated as follows: 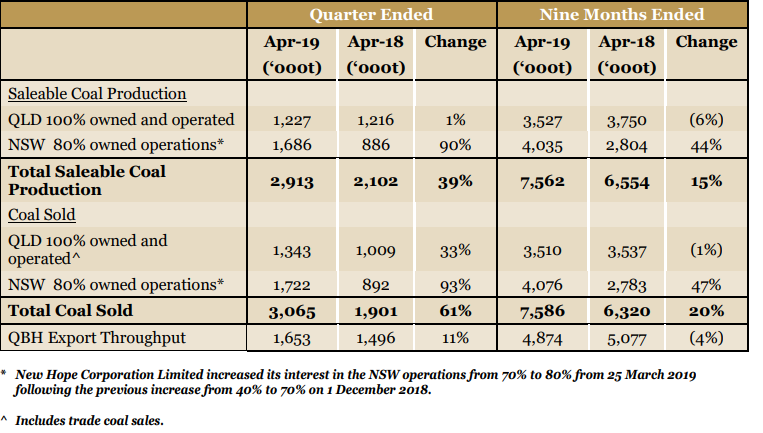 New Acland operations concentrated on the West Pit and Centre Pit during the quarter along with continued works to screen, and process the coal recovered from the old underground workings which have extended the recoverable coal, but with resulting impacts on yield and feed rates in the coal handling plant during processing.

Rehabilitation continued across the site while reshaping and top soiling of the eastern batter on one of the in-pit tailings dams commenced during the quarter.

The Jeebropilly operations also progressed and the mining is expected to be completed by the end of 2019 (CY19). Closure planning and post-mining land use optimisation work continued and Jeebropilly shaped and seeded a further 11 ha of rehabilitation during the quarter.

Also, on 12 March 2019 New Hope informed the stakeholders that the Department of Environment and Science in Queensland had approved its application to amend the Environmental Authority for the New Acland Coal Mine Stage 3 Project. Subsequently, on 20 March 2019, the Queensland Department of Natural Resources, Mines and Energy commenced the advertisement of the Associated Water Licence application, with the public submission period ended 7 May 2019.

An Associated Water Licence and multiple secondary approvals are still due for the project. The company is committed to deliver the project and working to accelerate the receipt of relevant government departmentsâ approvals.

The company also completed the acquisition of Mitsuiâs 10% interest in the Bengalla Joint Venture for AU$ 215 million. The completion of the transaction provides New Hope with an 80% interest in the highly prospective asset, which is expected to deliver significant benefits moving forward. New Hopeâs share of coal produced at Bengalla during the quarter was 1.7 million tonnes, 90% above the prior corresponding period. Through debottlenecking and incremental expansion, the Bengalla operation is now producing at an annualised rate of ~ 10 million tonnes of saleable coal. 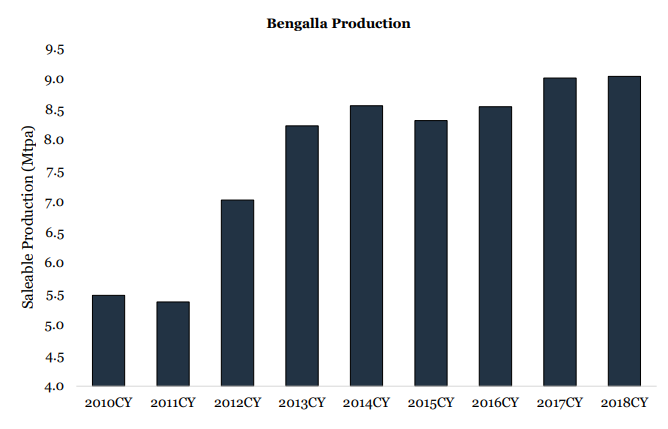 With a market capitalisation of around AU$2.33 billion and approximately 831.27 million outstanding shares, the NHC stock closed the market trading, at a price of AU$ 2.770, down 1.071% with ~ 3.16 millions of shares traded. In addition, the company has an annual dividend yield of 5.71%.

Tags:
Mining NHC
All pictures are copyright to their respective owner(s).Kalkinemedia.com does not claim ownership of any of the pictures displayed on this website unless stated otherwise. Some of the images used on this website are taken from the web and are believed to be in public domain. We have used reasonable efforts to accredit the source (public domain/CC0 status) to where it was found and indicated it below the image.