Neometals Limited (ASX: NMT), an industrial mineral and metal producer, announced on 1st May 2019 that the company is keeping up with its strategy to deliver capital efficient returns to the shareholders. As per the announcement, the companyâs Board declared a dividend of 2 cents per share, which will total around A$11 million. Neometals mentioned that out of the A$0.020, A$0.010 will be franked, and post paying the dividend, the cash balance of the company will stand at A$116 million.

As per the company, a holder of an ordinary share registered at 5.00pm WST prior to the record date will be eligible for the declared dividend, which marks the fourth consecutive dividend payment made by the company in as many financial years. Once completed, the declared dividend outflow coupled with previous dividends will account for A$39 million.

Neometals announced the dividend on 1st May 2019, the Ex-Date is 7th May 2019, and the company stated that the Record Date is 8th May 2019. The declared dividend will be distributed to respective shareholders on the Payment Date, i.e., 15th May 2019.

The company marked a net cash outflow from operating activities of A$2.7 million, in which staff and administration cost weighted the highest, after that the exploration and evaluation weighted on the cash. The company witnessed a net cash inflow of A$102.03 million from investment activities, in which RIM sale accounted for an inflow of circa A$103 million.

The cash and cash equivalent for the quarter stood at A$129.58 million.

Neometals owns and hosts three advanced core project, intending to develop and supply strategic materials. The core projects of the company include:

The project of the company is approx. 80km Northwest of Sandstone, Western Australia, and as per the company, it contains the worldâs second highest-grade hard rock titanium resources. The vanadiferous-titanomagnetite (VMT) resources of the project stand at 280.1 million tonnes at 9.18% of titanium oxide (TiO2) and 0.44% of vanadium oxide (V2O5).

The project of the company aims to recover metals used in batteries, such as cobalt, nickel, lithium from used lithium batteries. As per the company, the pilot plant testing is ongoing, and a commercial development decision is expected in the year 2020. The business model of recycling is depicted in the picture below. 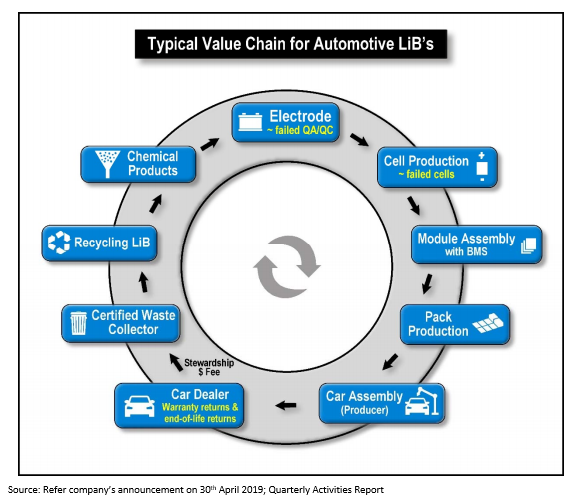 The company is progressing with the engineering and approvals for the development of the project to supply lithium hydroxide to the cathode industry in the battery segment.

The companyâs tenements licence changes (sold and acquired) are as follows: 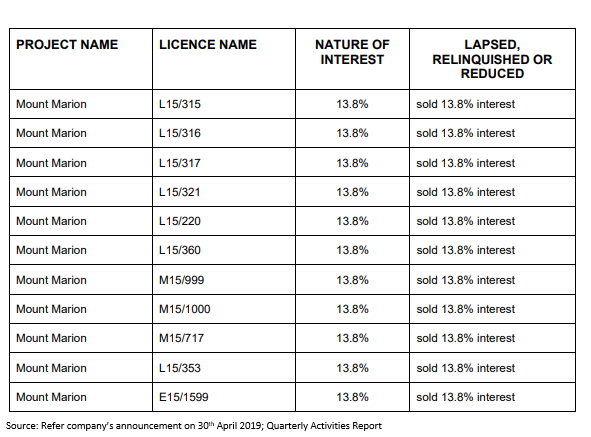 Neometals also touched upon the demand and supply scenario of the strategic metal it produces.

As per the companyâs forecast, the demand for vanadium is expected to surge and peak in 2027, and the supply will slip amid an outlook of high steel demand. As the major use of the metal is to provide strength to heavy steel material such as oil and gas pipelines.

The company also projected a rise in titanium oxide demand over the long run amid high demand from the titanium industry, which further caters to the industry such as welding electrode fluxes.