Mining is amongst the oldest industries across the world and continues to be an attractive space for both businesses and investors, as metals and minerals are vital requisites for various other industries. The exploration, manufacturing and processing of resources, wrapped under the Earth’s crust, form the crux of the mining industry.

Australia based mining company, Mount Burgess Mining NL (ASX: MTB) primarily focusses on mineral exploration with geographical segments including Botswana and Namibia. MTB was incorporated in 1983 and listed on the Australian Securities Exchange in 1985. The company’s registered office is in East Victoria Park, Western Australia.

MTB focuses on the exploration of mineral resources. In the event of a discovery, the company aims at developing commercial deposits of mineral resources. MTB has an applied experience in metals including gold, zinc, lead, silver, germanium and vanadium. In sync with its objective, MTB discovered the Red October Gold Deposit in Western Australia. The exploration pace continued with the discovery of three kimberlites in Namibia. Presently, the company is focussed on the development of Kihabe and Nxuu deposits in Botswana.

MTB’s project portfolio includes the Kihabe-Nxuu Base Metals Project, which is situated in Western Ngamiland, Botswana, on the border with Namibia. This region is known globally as a significant hub of one of the most profitable vanadium mines. Adhering to this alluring opportunity, the company aims to unlock the potential of its Zinc/ Lead/ Silver/ Germanium and Vanadium Project. It possesses 100% of Prospecting License PL 43/2016, granted in 2016 for three years period and the option to renew for two more years, which was further applied and granted. With the present license valid until 31 December 2020, the company can seek an extension until 31 December 2022. 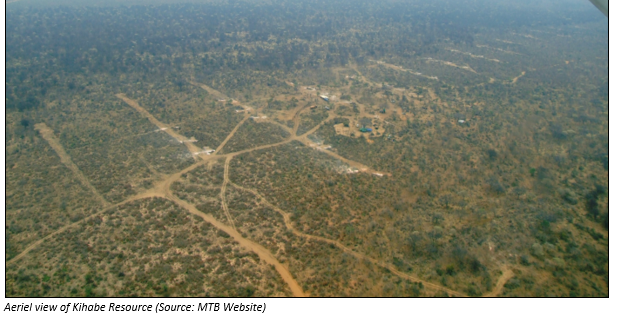 The company has recently received encouraging results from preliminary Sensor Sorter test work, which was conducted by STEINERT on 10 samples from the Nxuu Deposit. The promising results, which left 51% of mineralised Quartz Wacke available for milling and processing, have signalled potential of a significant power, capex and treatment cost reductions. In addition, with a 49% reduction in treatment tonnage, the company is expecting a major reduction in the environmental footprint. Pleased by the same, STEINERT has endorsed to proceed to a bulk test in order to confirm the sorting results.

The company has an elite and well-experienced management and Board. The Directors of the company are committed to ensuring smooth functioning of mining operations and fruitful functionalities. Mr Nigel Raymond Forrester, F.C.A is the Chairman and Managing Director, who holds an experience of more than thirty years in the exploration and mining industry. He was one of the original shareholders of MTB, which he floated in 1985.

Supporting him are the highly skilled Non-Executive Directors of the company. Mr. Chris Campbell-Hicks a global expert with work experience in regions like Ghana, RSA, PNG, Fiji, Indonesia, Chile, Guinea, Turkey and Kazakhstan, spent six months in Botswana, taking care of the construction, commissioning and training for the operation of the Tati nickel, copper, cobalt plant. He has contributed in progressing greenfields through to successful production in several gold and base metal projects in Australia.

The Management of the company is women-oriented. Ms Serene Chau is the present Company Accountant & Joint Company Secretary. She has previously worked in the accounting domain with Arthur Anderson and Co, Ernst and Young in Malaysia. Post her degree in Master of Finance, she has worked for Deloitte Touche Tohmatsu. Aiding her in managing affairs is Mrs Jan Forrester, one of the oldest employees associated with the company since 1985 and appointed as Joint Company Secretary in 1993.

Committed to the concept of workplace diversity, MTB believes that diversity includes, but is not limited to, gender, age, ethnicity and cultural background. The Board focusses on supporting the representation of women at the senior level of the Company and on the Company Board.

Righteously, MTB, the Board and the Senior Management are committed to the concept of Corporate Governance Principles and Recommendations, ethical standards and risk management.

On 13 August 2019, MTB’s stock settled the day’s session at A$0.002 with a market capitalisation of the company of A$1.04 million and approximately 520 million outstanding shares.

Given the steady progress made in the Kihabe Nxuu deposits, MTB is in discussion with various parties regarding solar/hybrid power for the project. The success story of the project is paving an optimistic path and future for the company, and the bright outlook would continue to attract businesses and investors to get associated with MTB.