MMG Limited (ASX: MMG) is a company from the metals and mining sector engaged in the exploration, development and mining of base metal deposits around the world.

MMG Limited recorded a total recordable injury frequency (TRIF) of 1.33 per million hours worked for the first quarter of FY2019. There was a fall in the total copper production by 10% to 114,369 tonnes as compared to its previous corresponding period (pcp).

The outbound, as well as the inbound logistics of Las Bambas, got influenced by the community blockades from 4 February 2019 and 26 March 2019 respectively. As a result of diminishing supplies, the production during the period was also seen impacted from the beginning of April 2019. However, from 10 April 2019, the logistics restored gradually. As a result, the operations are also returning back to normal. By the end of FY2019, the company expects a lower production and a guidance range of 385,000 and 405,000 tonnes for Las Bambas.

During the quarter, Kinsevere was able to produce 12,539 tonnes of copper cathode. Here, the production of copper cathode was influenced by the reduced ore mined grade as well as the tonnes from the reduced levels of the satellite Mashi pit along with the lower plant output. However, the company expects Kinsevere production to be in the range of 65,000 – 70,000 tonnes with C1 costs of US$2.05-2.15/lb.

During the period, the total production of zinc increased by 21% to 57,151 tonnes on pcp. Despite extreme wet weather and flooding event in Queensland, the production of zinc in zinc concentrate for the first quarter was 38,665 tonnes, which was more than 35% on pcp. In spite of temporary disturbance of as logistics well as mining, the company expects that Dugald River would be able to achieve production guidance in the range of 165,000 to 175,000 tonnes of zinc production.

The production of zinc in zinc concentrate through Rosebery was 18,486 tonnes during the quarter, in line with PCP. 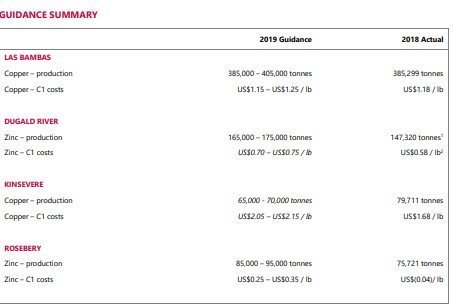 On 15 April 2019, the company announced that the communities had agreed to remove the existing roadblocks at the Yavi Yavi farm and Manantiales near the entrance of the mine.

The shares of MMG traded last on 6 September 2017 with the closing price of A$5.00. MMG has a market capitalization of A$3.98 billion and approximately 795.76 million outstanding shares.