Mining has been a cornerstone of the Australian economy and has pipeline of opportunities in the upcoming years. Let’s look at each of them individually with their key updates.

BHP Group Limited (ASX: BHP) is an Australia registered company involved in the minerals exploration and processing and production of coal, iron ore, etc. The company was officially listed on ASX in 1885. As per the media reports, BHP Group Limited has joined hands with the biggest oil companies in the world to close its operations in the Gulf of Mexico on the back of expected storm in the area.

The company has stakes in exploration and producing assets on the US and Mexican sides of the Gulf of Mexico. In addition, the company closed its operating rigs in the US waters. According to the Bureau of Safety and Environmental Enforcement, with operators shutting down 602,715 barrels a day of oil production ahead of the storm, more than 30% of crude oil production in the Gulf is now out of action.

Recently, BHP Group Limited hosted an investor briefing on the tailings storage facilities. The company in a briefing stated that there are mainly three broad design types of tailings dams, such as upstream, downstream and centerline, and the company has 67 operated tailings facilities across all sites. BHP has 13 active operated facilities, with 12 of them located in Australia and one in Chile. Moreover, it has 29 operated upstream facilities, with 5 active facilities out of 29 in total. 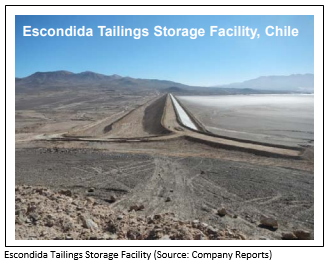 The company’s approach to dam risk management is a multi-dimensional process of continuous assessment, which is focused on the governance of dam facilities, monitoring, surveillance and review, emergency preparedness and response and maintenance of dam integrity.

BHP’s strategy identifies how to position the portfolio to maximise long-term value and deliver high returns for shareholders and is targeted to have best commodities, best assets and best capabilities to create long-term value and high returns, with transformation, capital discipline and social value to enable the successful execution of its strategy. With respect to the portfolio, the company’s assets and options are tested against strategic themes to help navigate future uncertainty, with investment in the capabilities required to outperform in the future. BHP has a suite of options with different risk, return and optionality attributes. The company has a strong balance sheet and a strict capital allocation framework, which allows investments in the right commodities and assets at the right time.

The company pointed out no change in production guidance of petroleum, copper, metallurgical coal and energy in FY 2019. On the flip side, the guidance for iron ore production declined to be in the range of 265 and 270 Mt. Additionally, the group copper equivalent production broadly remains the same over the nine months ended March 2019, with the expected volumes for the full year to be in line with the last year. The company anticipates full year unit costs for Petroleum, Escondida and Queensland Coal to be in accordance with the guidance and all major projects of the company under development are tracking to plan.

Cooper Energy Limited (ASX: COE) is an upstream oil and gas production and exploration company, officially listed on ASX in 2002. On 11th July 2019, the company via release updated the market that it has inked a new gas supply agreement with Visy. Under the terms of the agreement, the company will be supplying 7.6 petajoules of gas from Sole gas field effective January 2020 to 2023. In addition, the agreement may be extended for a further three years.

MD of Cooper Energy Limited expressed his thoughts that this agreement with Visy represents the company’s support for all domestic demand segments. Visy joined O-I Australia as the second large industrial manufacturer supplied by COE. The key personnel of Visy noted that it appreciates the support and engagement from COE to help secure supply during tough east coast gas conditions.

In another update, the company announced a gas sales agreement with AGL Energy to supply the gas from its Sole and Casino Henry gas operations. Under the terms of the agreement, AGL Energy contracted to take (1) Commissioning of gas; (2) Up to 4 petajoules from Sole for the period 1st January 2020 to 30th April 2020; (3) 100% of COE’s share of gas production from Casino Henry for CY2020.

Importantly, the company reported revenues for the quarter ended March 2019 of $20.6 million, reflecting a rise of 43% from $14.4 million in the previous quarter driven by increased gas prices and production and higher oil sales volume. YTD sales revenue for the period amounted to $56.8 million, an increase of 21% from pcp on the back of higher gas prices more than offset the impact of lower oil and gas production. In addition, the company reported year-to-date production of 0.99 million boe, down on the previous comparable period production of 1.14 million boe.

In terms of the development of projects, the construction of the offshore project has been completed, along with the repair of Casino Henry umbilical in May as planned. The cash balance of the company amounted to at $157.1 million in the quarter ended 31st March 2019 against $193.9 million at the start of the quarter. The borrowings for the period were $189.4 million as compared to $186.4 million and net debt at the quarter ended 31st March 2019 stood at $32.3 million when compared to net cash of $7.5 million at the beginning of the quarter. 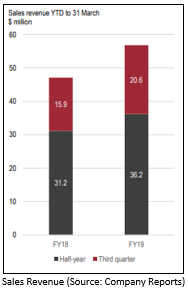 Let’s look at the long-term return of the two mining and energy stocks. For the period of five years, BHP’s has stock provided a return of 26.07%, whereas COE’s stock has yielded a return of 25.47%.