Metro Mining Limited (ASX: MMI) is an exploration and mining company, part of the energy sector and focusses on the exploration of bauxite. The company was established in 2014 and its headquarters are situated in Brisbane. MMI owns the Bauxite Hills Mine project which spreads 95 km north of the Weipa Bauxite area, with a reserve of almost 92.2 million tonnes. Its total Resources are worth 144.8 million tonnes. The company holds one of Australiaâs largest thermal coal resources situated in Surat Basin, Queensland. 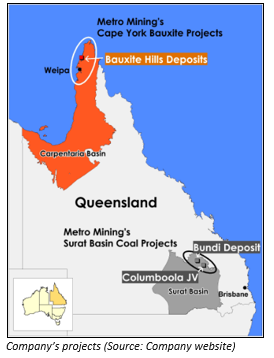 On 23rd May 2019, the company conducted its Annual General Meeting and Chairman Stephen Everett addressed the gathering.

For the financial year ended 31 December 2018 the companyâs gross profit from the Bauxite Hills Mine amounted to $9.6Million and the group profit before tax was reported to be $2.19Million. In 2018, MMI shipped 2.04 million tonnes of bauxite. This meets the 2018 guidance of 2.0m WMT. The production guidance for 2019 has been upgraded by approximately 17% to 3.5 million tonnes for 2019.

To meet the 2019 guidance, the company has zeroed in on the works to upgrade the mine property and loading facilities. Requisite equipment has been mobilised. The DFS for the expansion to 6Mtpa would be released in June. The company shipped more than 350,000 WMT of ore. The Bauxite hills have been a profitable project with the mine EBITDA of A$8.6M for the December quarter. Operations have begun again with the first 5 ships already loaded and sailed.

75% of 2019âs production has already been sold by the company. The Chinese imports were at record level and its outlook remains strong. Inland Chinese refineries have a strong demand out of MMI. There was an increase with total 2018 imports which exceeded 82M WMT. The imports are well in sync for 2019 to be more than 90Mt. Besides China, the supply side response from Guinea has been strong.

Even after witnessing a challenging first quarter in 2018, the production guidance was achieved with 100% of the produce sold to 5 different customers. The operating costs and realised prices were up despite adverse weather conditions and lower AUD/higher bunker fuel prices. Cost reductions have further been identified by MMI and are expected to be realised in 2009 and post that as well.

For 2019, the company has completed Low capital cost improvements to aid expansion. Moreover, Logical transition to owner/operator is set to commence in 2019; the recruitment process for which has already been completed.

In the AGM, all resolutions were passed.