Metminco Limited (ASX: MNC) is a mining and metal exploration company. Today, MNC announced the signing of concession contract with Colombian National Mining Agency (ANM) for exploration over Chuscal Gold Prospect as advised by JV partner. The company also reported updates on drilling plans for the project and earn-on period.

Chuscal Gold Prospect (the Chuscal JV) is a part of company’s Quinchia Gold Project in Colombia. MNC will reportedly earn a 51% interest over the course of three years through the expenditure of US$2.5 million. The JV is formed with Anglo Gold Ashanti Colombia SA (AngloGold), which advised that a concession contract has been signed with Colombian National Mining Agency (“ANM”) for the span of two years in respect to exploration over two areas covering the Chuscal Gold Prospect. Concession contracts would be registered with ANM, which will mark the commencement of the earn-on period for the Chuscal JV. Please read below excerpt from the announcement as reported:

MNC is planning to start a drilling program of approximately 2,500 m of diamond drilling which would test the large outcropping Chuscal porphyry gold target with epithermal gold overprint. The program would commence after receiving permits, approvals and financing along with the completion of the proposed merger with Andes Resources Limited. MNC is aiming to complete the merger by mid-July 2019 as reported today.

MNC reported that the data obtained is being compiled and interpreted at the surface and once authorisations are available, drilling is planned to start. Along with data, magnetic susceptibility measurements on the coarse rejects from the multiple phases of geochemical sampling will allow developing a detailed 3D exploration model to guide inversion modelling of existing aeromagnetic data. The 3D model would be used to define mineralisation characteristics and structure to guide drilling. In the north of the project, there is the southerly continuation of the Tenorio trend. This trend has not been mapped or sampled earlier, and sampling and mapping will be extended to cover this trend subject to landowner access.

Chuscal Project is a part of Quinchia Gold Project in the Mid-Cauca Gold Belt in Colombia. The JV with Anglo was formed in 2018 and covers three licenses. Two of the tenements are the subject of the recently signed concession contracts. The project features undrilled surface gold geochemical anomaly with high-grade sample results up to 54 gpt Au. 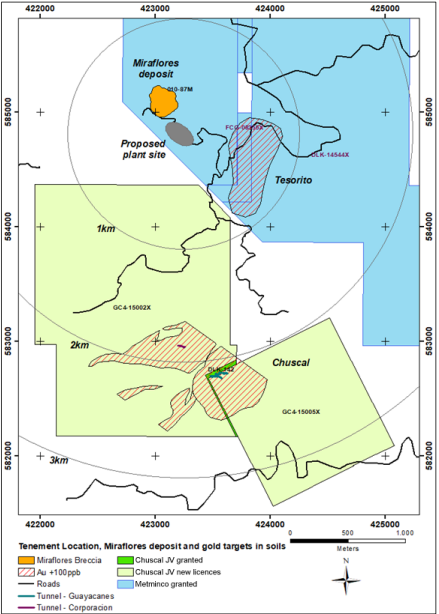 Kevin Wilson, Executive Chairman of MNC, stated that the signing of concession contracts is a vital step in drilling priority porphyry gold targets at Chuscal. He further mentioned about the diamond drilling programme which is scheduled to commence after the proposed merger with Andes Resources and associated $2.3 million financing along with necessary approvals and permits.