Metals X Limited (ASX: MLX), an Australian Stock Exchange listed base metals producer, announced on 14th May 2019 that the company received highly encouraging results from Renison Tin Operations, a 50 percent owned operation of the company in Tasmania. The company undertook an exploration drilling at the conceptual Bell 50 target, which is located beneath the high-grade Area 5, currently in development. 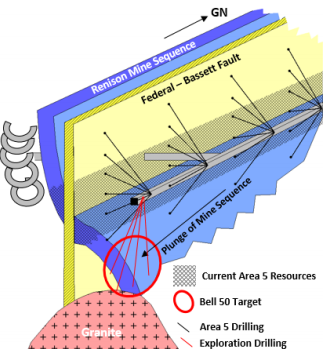 The company drilled a total of 5 holes with accounted for 1,772m of drilling from the southern end of 1140 HW Drill Drive. The drill aimed to test the down-plunge extension of the host mine. Metals X mentioned and identified this down-plunge test area as Bell 50.

The company recently presented a reset plan for its Nifty Copper Operations. 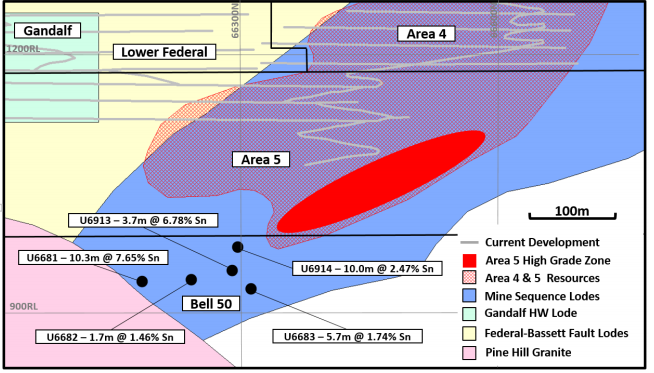 The results of the above-shown drill locations include:

Bell 50- Exploration drill results for April-May 2019 are as follows:

The drill hole U6681 intersected a significant width within the No.2 Dolomite, which is the primary Area 5 host rock, in close proximity to the granite contact and it also continued into the granite; however, did not return any significant assay.

The drill holes in the Red Rock Member, namely U6682 and U6913 penetrated the granite as well and returned results as shown above.

As per the company, the results from newly identified down-plunge (Bell 50) are considered highly significant and provide a potential for the extension of Area 5 mineralised system until 200m towards the down-plunge.

Mr Simon Rigby, a member of the Australian Institue of Geoscientists, complied the exploration results, and the company qualified him as a Competent Person as defined in the JORC 2012 edition.