In an announcement made on 17 May 2019, the company announced that it has reached agreement to sell the Scaffold and Blast & Paint component of its Mastertec subsidiary to Radbyrn Pty Ltd for around $6.0 million consideration.

It is expected that through this divestment the company will generate a gain of $1.9 million. Further the divestment will provide further balance sheet strength and additional capital flexibility to continue to support the growth opportunities in the companyâs core specialist capabilities within the buoyant underground coal mining market.

The first half of FY19 was the companyâs 3rd consecutive half year period of strong growth. The company generated revenue of $116.8 million in H1 FY19, up 28% on the previous corresponding period (pcp), driven by the award of new contracts in the mining division along with scope increase and extensions of existing mining contracts. 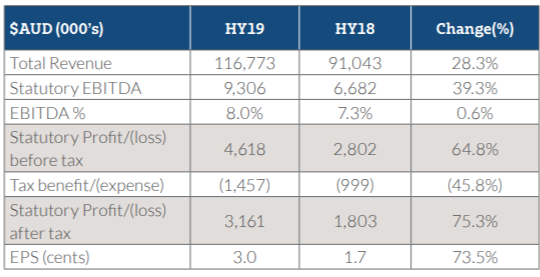 Further, the company reported EBITDA of $9.3 million for the half year period, up 39.3% on the previous corresponding period (pcp). With robust coal market outlook, the company is expecting strong results in the second half of FY19. Before that in FY18 also, the company had produced improved outcomes across all areas of its business with significant cost reduction achieved during the period.

The overall cash position at 31 December 2018 was a net increase in cash and cash equivalents of $4.5 million, attributable to improved operating cashflow from increased revenue and better financial performance for the six months.

The company recently narrowed its FY19 Revenue and EBITDA guidance from $230 to $250 million and $20 to $23 million to $240-$250 million and $21-$22 million respectively, driven by the increased scope on existing contracts and improved production on its performance based contracts.

Tags:
Mining ASX: MYE
All pictures are copyright to their respective owner(s).Kalkinemedia.com does not claim ownership of any of the pictures displayed on this website unless stated otherwise. Some of the images used on this website are taken from the web and are believed to be in public domain. We have used reasonable efforts to accredit the source (public domain/CC0 status) to where it was found and indicated it below the image.