We have written some important information on Element 25 Limited (ASX:E25), which can be viewed by clicking here.

Southern Cross Media Group Limited (ASX: SXL) has recently announced that Macquarie Group Limited and its controlled bodies corporate have ceased to become substantial holder in the company. In another update, SXL stated that Challenger Limited and its entities made a change to their substantial holdings in the company with the current voting power of 8.32% as compared to the previous voting power of 6.14%. The company is raising equity of around $169 million and it will use these proceeds to decrease net debt and to further finance the transaction costs. During 1H20, the company reported underlying EBITDA of $62.2 million and witnessed a decline of 8.2% in group revenue. SXL will make capex reductions of $3 million to $6 million over FY20 and FY21. The company has cancelled its FY20 interim dividend of 2.75 cents per share and will not pay any final dividend for FY20.

Webjet Limited (ASX: WEB) has recently notified the market that it has successfully wrapped up its retail entitlement offer and raised around $118 million. This reflects the second stage of WEB’s $346 million equity raising through institutional placement and pro-rata accelerated non-renounceable entitlement offer. In another update, the company announced that Credit Suisse Holdings (Australia) Limited on behalf of Credit Suisse Group AG and its affiliates ceased to become substantial holder in the company on 17th April 2020. As at 31st December 2019, the cash and equivalents stood $157.2 million, which includes $19.3 million of client funds. The company has suspended its FY20 EBITDA guidance because of the continued uncertainty of the duration and scale of Covid-19 pandemic. 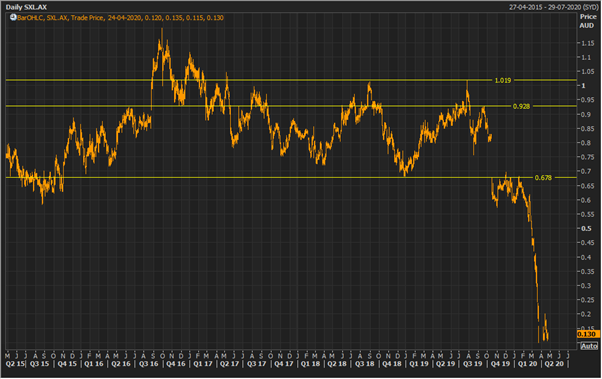