Despite the fall in the overall market, some companies on ASX managed to close in green such as Janus Henderson Group Plc (ASX: JHG), which was up by 8.174% to $26.600. Fisher & Paykel Healthcare Corporation Limited (ASX: FPH) closed at $26.540, indicating a rise of 4.901% on an intraday basis.

Recently, we have written an article on Greenland Minerals Limited (ASX: GGG), which can be read by clicking here.

Janus Henderson Group Plc (ASX: JHG) has recently released its results for Q1 FY20, wherein, it reported operating income amounting to US$(332.4) million against US$154.3 million in Q4 FY19. Diluted earnings (loss) per share stood at US$(1.35) as compared to US$0.59 of Q4 FY19 and US$0.48 of Q1 FY19. During the quarter, its adjusted revenue amounted to US$442.7 million, which reflects a decline from US$463.1 million of Q4 FY19 because of lower average AUM, lower performance fees and partially offset by a higher net management fee margin. The company managed to close the quarter with the cash and investment securities of US$1,602 million. The Board of the company has declared a dividend of US$0.36 per share for Q1 FY20, which will be paid on 27th May 2020 with the record date of 11th May 2020. The company is planning to release its Q2 FY20 results on 29th July 2020.

Fisher & Paykel Healthcare Corporation Limited (ASX: FPH) recently announced that it would release its results for FY20 on 29th June 2020. In another update, the company announced that it has been elected as an essential service by the Government of New Zealand. During 1H FY20, the company reported operating revenue and profit after tax amounting to $570.9 million and $121.2 million, reflecting a rise of 12% and 24%, respectively.

For FY 2020, the company stated that its full-year operating revenue has been anticipated to be approximately $1.24 Bn and net profit after tax in the range of $275 Mn- $280 Mn. 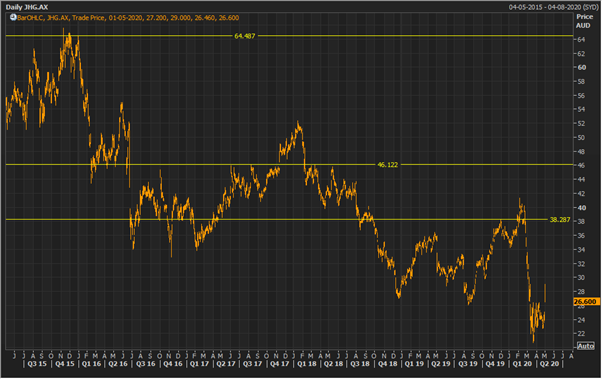