On May 28, 2020, Nearmap Ltd (ASX: NEA) ended the session in green as the stock witnessed a rise of 16.667% on an intraday basis to $2.240 per share and Virgin Money UK PLC (ASX: VUK) rose by 10.137% to $2.010 per share. NEA has stated that its ACV (or Annualised Contract Value) has been growing and now exceeds $102 million (considering AUD/USD constant currency FX rate of $0.70). It was further added that Nearmap AI would be rolled out and available commercially with the help of self-service export as well as offline channels in the United States and Australia on June 1, 2020.

We have written important information on Lake Resources NL (ASX: LKE) and the readers can click here to read the information.

Decmil Group Limited (ASX: DCG) has recently made an announcement that it has launched capital raising in order to strengthen balance sheet as well as provide working capital so that profitable new contract opportunities can be pursued.

The company had some significant challenges as it entered 2020, including tight balance sheet. It was added that the capital raising addresses this issue and would set the company up well to continue delivering and pursuing profitable new contract opportunities.

In the release dated April 14, 2020, Jumbo Interactive Limited (ASX: JIN) stated that Mr David K Barwick has tendered resignation from the post of Director as well as Non-executive Chairman, because of duration of his tenure.

Mr Barwick has worked with JIN and its shareholders for the span of around 14 years. He was appointed as Director on August 30, 2006 and as Non-executive Chairman on November 22, 2007.

Earlier, the company has stated that it continues to monitor the evolving situation with coronavirus and the impact on the operations.

WiseTech Global (ASX: WTC) has recently made an announcement that the company has renegotiated earnout arrangements for numerous strategic acquisitions, to allow for better alignment of resources as well as to further strengthen the robust balance sheet.

Through the second half of FY 2020, the company has worked with 17 of the acquired businesses to simultaneously reduce and close-out future earnouts as well as replace significant cash payments with equity. This action further strengthens the balance sheet and liquidity, and the priority across strategic acquisitions is to accelerate CargoWise platform development and expansion, tighten focus and better align the resources into core CargoWise operations. 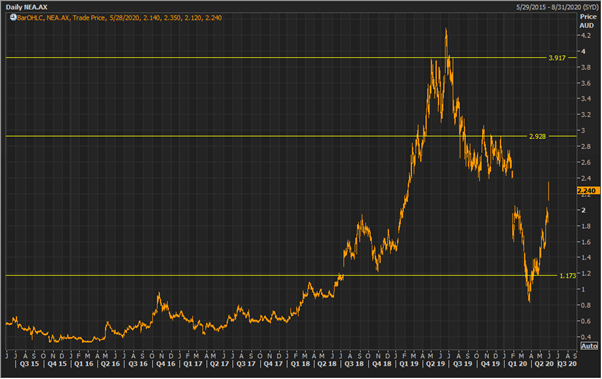