Lucapa Diamond Company Limited (ASX: LOM) is a growing diamond company based in Australia that focuses on high-value diamond production. The company has high-grade mines in Lesotho and Angola, besides exploration projects in Australia, Botswana and Angola. A rich producer of large and high-value alluvial diamonds, Lulo Diamond Project in Angola is the companyâs primary asset.

The company announced today that it has recovered a 130-carat gem quality diamond recently from the Lulo Diamond Project in Angola. The diamond so recovered is the 13th such diamond recovered to date with 100 plus carat and second so far in 2019. 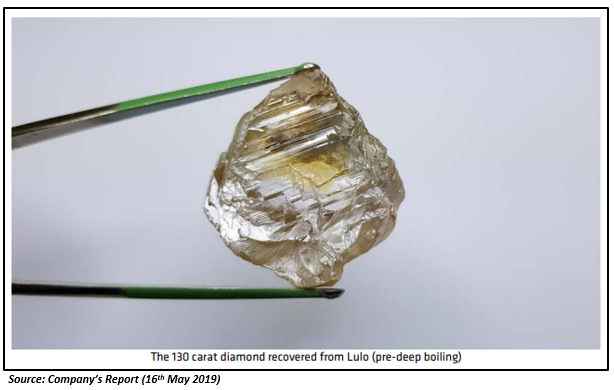 Majority of the diamond inventory will be sold by the Sociedade Mineira Do Lulo or SML (an alluvial mining company) in this quarter while some will be held for tender at a later date.

Lucapa published its quarterly activities report for the quarter ending 31st March 2019 on 9th April 2019. The company emerged as one of the few global producers of large and premium-value diamonds from two operating mines â Mothae and Lulo.

The 1.1 Mtpa Mothae kimberlite plant delivered an exceptional performance in its first full quarter of production. Lucapa has 70 per cent ownership in Mothae kimberlite mine along with the Government of the Kingdom of Lesotho that has the remaining 30 per cent.

During the quarter, the first tender of commercial diamonds production was completed in Antwerp. The production was undertaken through the new 1.1 Mtpa plant. The March Quarter marked a historic occasion for the Lulo mine and the Angolan diamond sector when the first historic sale of Lulo diamonds via international tender occurred.

In order to improve the financial position and reduce financing costs, the company agreed on funding and refinancing arrangements with New Azilian Pty Ltd and Equigold Pte Ltd on 4th April 2019. Under the agreement, New Azilian will enter into an AUD 10 million loan facility (for one year) with Lucapa at 10 per cent annual interest rate payable quarterly.

The companyâs stock closed flat at AUD 0.150 today. Around 416,901 number of Lucapaâs shares were in trade today. The 52-week high and low value of the companyâs stock was recorded at AUD 0.315 and AUD 0.145, respectively. The market cap of the company stood at AUD 74.38 million at the time of writing the report. The stock has not performed well in the past as it generated a YTD return of -18.92 per cent and six months return of -30.23 per cent.