LiveTiles Limited (ASX: LVT) is an IT company and is into the business of development and sale of business software in Australia and overseas released its Appendix 4C and also provided an update on its activities for the March 2019 quarter for the period ended 31 March 2019.

As at 31 March 2019, the company reported an annualized recurring revenue of A$34.5 million which went up by 208% in the last 12 months. In the March 2019 quarter, the company was able to achieve a significant ARR growth of A$3.6 million.

There was also a significant growth in the number of paying customers from 472 as at March 2018 to 879 paying customers as at 31 March 2019. The company is working continuously to secure a growing proportion of enterprise customer that is influenced by the sales and marketing investments of LiveTiles, high impact co-marketing initiatives taken with Microsoft as well as the strengthening of the brand awareness.

As a result of substantial growth in the enterprise customer base of the company followed by up-selling newer products to existing customers, the average ARR per customer in the March quarter was up by 65% over the last 12 months. 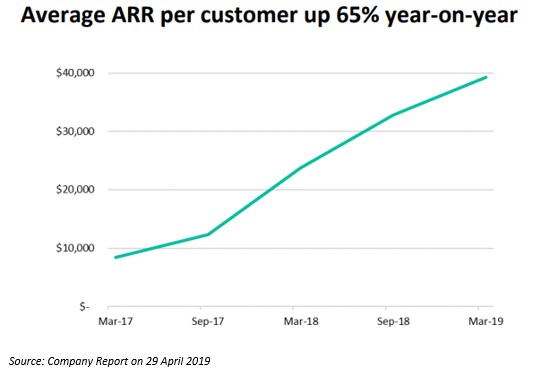 In February 2019, the company completed the purchase of a leading Microsoft-aligned, digital workplace software business, Wizdom in Europe. Through Wizdom software, the customers are provided with tools for driving the employee engagement, collaboration along with the compliance. With the acquisition of Wizdom, LiveTiles will have an established European presence as well as a strong position to grow regionally. Also, the company would be able to extend its intelligent workplace platform to deliver new news and content publishing capabilities. This intelligent workplace platform would also provide attractive cross-sell opportunities to the customers of LiveTiles and Wizdom.

On 20 March 2019, LiveTiles Limited announced that it entered into strategic partnership with Testfire Labs in order to introduce Intelligent meeting suite.

In the June 2019 quarter, the company expects gross cash operating expenses will be around A$14.5 million. At the same time, the company also expects that they would be able to deliver another year of strong revenue growth in FY19 that would be driven by the investment of the company in sales and marketing. The revenue would also be influenced by the launch of AI products of the company in 2018, high-impact comarketing initiatives with Microsoft along with the strong organic growth from Wizdom.