Cloud computing: It is a way in which the computing services like servers, storage, databases, networking, software, analytics along with intelligence are delivered over the internet. Cloud computing provides flexible resources, quicker innovation, as well as economies of scale. The users only pay for the cloud services they use. Thus, it helps in reducing the operating cost, and at the same time, the infrastructure also runs efficiently, and one can scale their business as per the requirements.

Cloud-based Talent Acquisition & Engagement Platform of Livehire Limited: It provides a solution that allows delivering highly engaged and well-matched talent to the organization. It creates a talent community which extracts pre-qualified candidates from the internet by integrating the forces of Mobile, Social, as well as Cloud along with the matching power of AI. It channelizes the process of interview and also optimizes hiring team association with its modern applicant tracking system.

Livehire partners with Rizing: On 7 June 2019, Livehire Limited announced that it has entered into a Solution Partner Agreement with a global implementor of SAP SuccessFactors, Rizing LLC under which Rizing would be introducing the talent management platform of the company to its clients.

Partnership Details : Rizing is entitled for a commission on obtaining a signed and paid client agreement for LiveHire . The company would be working in collaboration with Rizing in order to commence staff training, joint public relations and marketing activities to support in driving local joint brand awareness as well as increase demand generation.

Further, Rizing would also be endorsing the platform of LiveHire to employees as well as existing and potential customers as their recruitment and talent pooling platform of choice. It will also be distributing the promotional materials of the company for advertising new products, promotions as well as initiatives that will be launched by the company in order to secure a commitment from potential clients to adopt LiveHire.

Strategic Significance of Partnership: The company considers this agreement to be strategically material due to Rizingâs brand presence, market share, as well as widespread reach. This contract is effective 6 June 2019 and will continue till it gets terminated either for convenience or insolvency or material breach.

At the same time, the company is not able to disclose at this point of time regarding the total revenue that would be generated through this agreement as it is for an indefinite period with a contingent nature of client opportunities and also the commission that would be decided depending on the case.

LiveHire surpasses 1 million Talent Community Connections: Recently on 8 May 2019, the company announced that Talent Community Connections (TCCs) had exceeded 1 million TCC milestone which proves the accelerating nature of the LiveHire ecosystem. TCC is a key indicator which suggests about the client ecosystem growth followed by candidate adoption. Out of the 18 Australian Industries, 14 organizations use LiveHireâs platform. 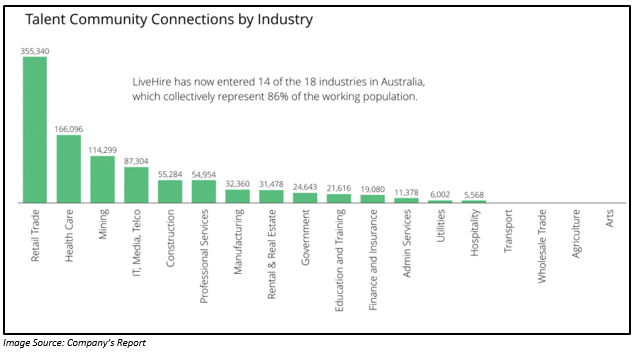 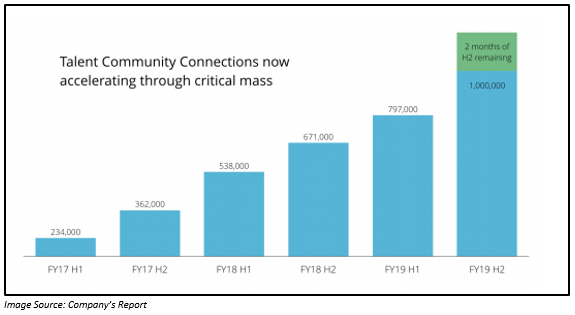 Quarterly Results: During Q3 FY2019, the company reported an Annualized Recurring Revenue growth of 20% to $2.47 million as compared to the previous quarter. There was an increase in the Talent Community Connections (network) by 15% to 919,641 on QoQ.

The company entered into the US market, started with 5 client implementations via Partner Channel. The company during the quarter released the first LiveHire High-Volume-Hiring product with Vodafone and Super Retail Group. In order to accelerate Channel Partner deployments and US market entry, the company raised $15 million in the month of March 2019. 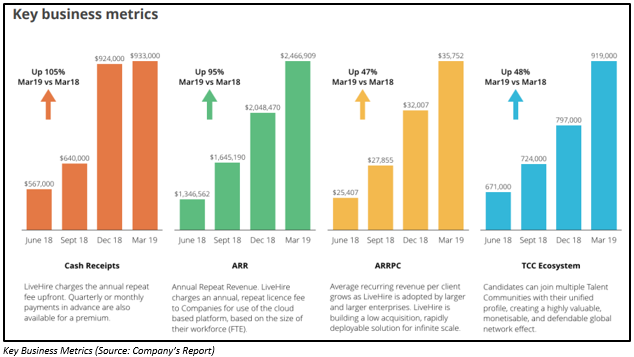 Stock Performance: Since its listing on ASX, the shares of LVH have generated an excellent return of 105.56%. By the end of the trading session on 7 June 2019, the price of the shares of LVH was A$0.385, up by 4.054% as compared to its previous closing price. LVH has a market cap of A$109.79 million and approximately 296.72 million outstanding shares.