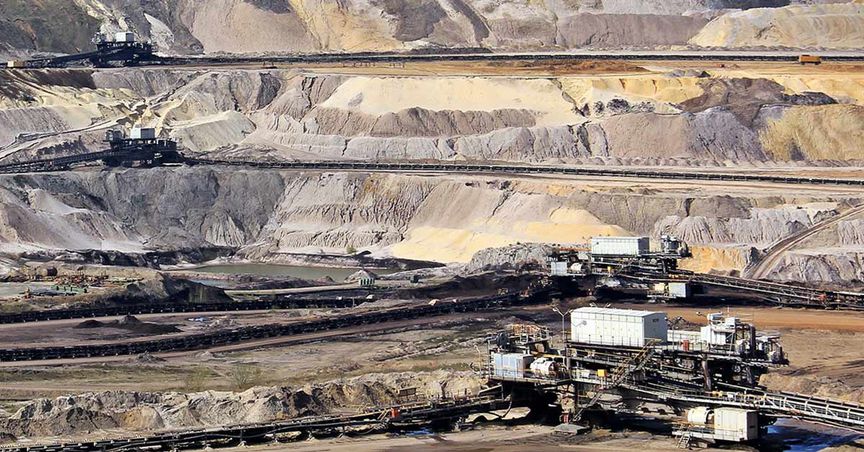 The stock of Lithium Australia NL (ASX: LIT) mounted 6% midday as the Company has been awarded  a grant from the Australian federal government’s Co-operative Research Centre Projects (CRC-P) initiative, for supporting the next stage of its $ 3.6 million R&D programme for LieNA®, which is one of Lithium Australia’s two proprietary technologies (the second being SiLeach®) for recovery of lithium from fine spodumene.

LIT, along with the Australian Nuclear Science and Technology Organisation (ANSTO), has been working on LieNA® to recover lithium from spodumene, which is the most common hard-rock source of lithium apt for producing critical battery chemicals.

The recovery rate of lithium from current spodumene concentration processes can be as low as 50% while LieNA® is able to successfully recover lithium from the fine spodumene in waste or tailings streams from such concentration techniques. It consists of a caustic digestion process, followed by acid leaching for recovering the desired lithium chemical. A key thing to note is that LieNA® does not require a roasting stage.

So far, extensive bench-scale test work on the LieNA® technology has already been completed by Lithium Australia and ANSTO, with final recovery of lithium reported as more than 85%.

Thus, LieNA® is considered as a novel invention by the Company and patent applications have been submitted seeking protection of this intellectual property (IP). The large potential of this novel technology lies in not only expanding the existing hard-rock lithium resources and lower mining costs but also aid improvements in the sustainability of spodumene production as well as manufacture of lithium chemicals thereafter.

As part of CRC-P Round 8, which focusses on critical minerals, Lithium Australia would be receiving a total grant of $ 1.3 million to proceed with the next development stage of its LieNA® technology, with the total project cost estimated at around $ 3.6 million.

This follows the announcement of successful CRC-P grant recipients for Round 8 by the Hon. Karen Andrews MP, Federal Minister for Industry, Science and Technology, on 9 February 2020. This federal government funding primarily aims to promote the development of critical minerals and “cement Australia’s position as a critical minerals powerhouse, grow the economy and create new jobs.”

It has been indicated that the grant activity would begin in February 2020 and is scheduled to end in March 2022, with the term of the grant expiring on 30 June 2022.

The Company has also informed that a major portion of the total project cost would be spent on design, construction and operation of a batch autoclave pilot plant at ANSTO’s Lucas Heights facilities in New South Wales, Australia.

As a part of its ambition to ‘closing the loop’ on the energy-metal cycle and creation of circular battery economy, Lithium Australia aims to establish a position in the battery-raw-materials supply chain in such a way that the production pathway is not constrained by the requirements of conventional spodumene converters.

Currently, fine spodumene is discharged to either waste or tailings by most producers who focus on achieving high-grade spodumene offtake, which has quite a demand in the mineral concentrate market. In offering a novel method for processing this fine spodumene, LieNA® has the potential to unlock significant value for Australian hard-rock lithium producers (as well as projects in development).

In its latest announcement, Lithium Australia expressed its acknowledgement for the support extended by both the Australian federal government and the West Australian state government throughout the CRC-P process, including the selection of LieNA® for CRC-P grant funding. The Company also acknowledged the support and planned in-kind contribution of its grant partners, listed in the table below. 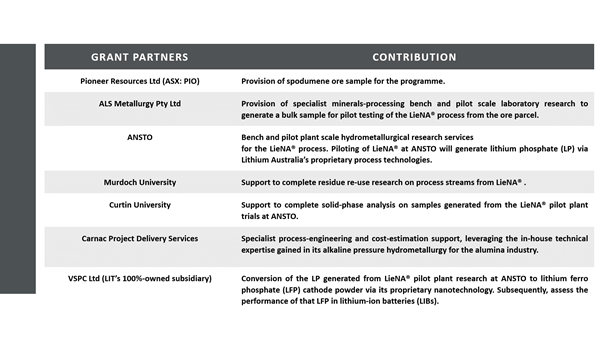