Focused on identifying oil & gas development asset opportunities, Sun Resources NL (ASX: SUR), is a West Perth-based oil & gas exploration and development company. It has its oil project - Bowsprit - on Leases 21754 and 21787 in the inland waters of the US state of Louisiana. The company recently released its quarterly activities report for the period ended 30 September 2019.

During the first quarter of the financial year 2020, the company achieved the following significant milestones:

Acquisition of Remaining 50 Per Cent Stake in Bowsprit

A legally binding Memorandum of Understanding was executed between Sun Resources and Pinnacle Energy International (USA) Inc, under which the former will acquire the latterâs subsidiary holding entity, Pinnacle Energy International (USA) I LLC, which has a 50 per cent working interest in the two leases. The company is due to make a cash payment of USD 250,000 prior to drilling of the first well and a royalty of 5 per cent of gross production revenue to Pinnacle.

The deal completion is subject to certain conditions, such as execution of a sale and purchase agreement, royalty agreement and payment of the cash consideration. All the conditions need to be met by 1 March 2020; otherwise, the agreement will be terminated and revert to equal ownership between Sun Resources and Pinnacle.

The Bowsprit oil project is assessed to contain an undeveloped conventional Miocene aged oil sand at a depth of ~7,400 feet, located above a deeper, 9,500 feet gas field developed by Shell in 1960s. The company intends to drill a vertical pilot hole to evaluate underlying Middle Miocene Sand (T2) and additional potential gas accumulation a few hundred feet deeper (T3) reservoirs. This will be followed by the well deviation to place a horizontal well between former production wells in the proven (flowed) Upper Miocene Sand (T1).

Sun Resources plans to rapidly place the field on production either by low cost tie-back to a near-by facility for early cash flow and/or, through a dedicated new unmanned production facility with additional development drilling, provided the prospective resources at the T2 reservoir are present and the accumulation is sizable.

Based on the 3D modelling of the Bowsprit Field, the company selected a primary well location, with well permitting nearing completion. SUR recently obtained the first of three necessary permits, with the remaining two permits anticipated to be awarded by approximately the end of November 2019.

The company plans to drill the first Bowsprit well as soon as practical; however, the plan is subject to funding arrangements and/or execution of a farm out, which it is expecting in the first quarter of 2020. The initial well is estimated to entail a cost of ~US$ 3.6 million.

Depending on the results of the appraisal well, early production could be established in mid-2020. 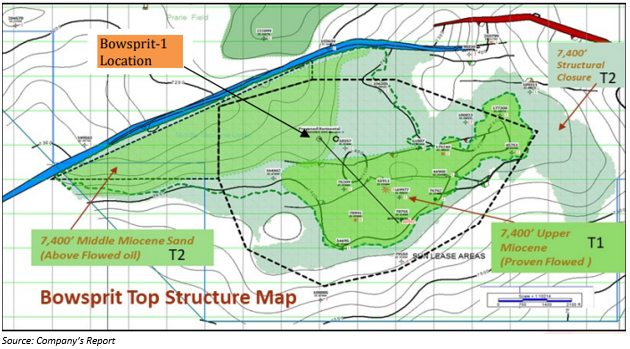 During mid-August 2019, the company appointed GTT Ventures as its corporate advisor and one of the latterâs partner Patrick Glovac joined the SUR Board. The company also implemented a Small Shareholding Sale Facility, which closed on 24 October 2019, with GTT executing the sale of the shares. Proceeds are due for dispatch to shareholders in early November 2019.

The company also raised $ 615,000 by a placement of 307.5 million shares at a price of $ 0.002 per share during the quarter, with proceeds targeted towards progressing the Bowsprit Oil Project. The placement also included two free attaching options for every three shares subscribed for. The exercise price of options is $ 0.004 per share, with the options due to expire on 31 December 2020.

September Quarter Cash Flow Report - In the reported quarter, the company used $ 588,000 in operating activities, while cash inflows from financing activities stood at $ 787,000. At the end of September 2019, SUR had cash and cash equivalents of $ 241,000.

SUR is scheduled to hold its 2019 Annual General Meeting (AGM) on 29 November 2019, discussing the performance of the company during FY2019 and considering following resolutions:

Farm Out: Sun Resources is currently in active discussions with several potential partners for the project and has appointed farm-out agents in Australia/Asia and the US. PetroDIP is the companyâs primary farm-out agent, while another agent has been appointed in the US. During early November 2019, the company will give project presentations to several prospective farminee players in the US.

This website is a service of Kalkine Media Pty. Ltd. A.C.N. 629 651 672. The website has been prepared for informational purposes only and is not intended to be used as a complete source of information on any particular company. The above article is sponsored but NOT a solicitation or recommendation to buy, sell or hold the stock of the company (or companies) under discussion. We are neither licensed nor qualified to provide investment advice through this platform

Tags:
Oil and Gas ASX: SUR
All pictures are copyright to their respective owner(s).Kalkinemedia.com does not claim ownership of any of the pictures displayed on this website unless stated otherwise. Some of the images used on this website are taken from the web and are believed to be in public domain. We have used reasonable efforts to accredit the source (public domain/CC0 status) to where it was found and indicated it below the image.