Parkway Minerals NL (PWN), an Australian-headquartered and ASX-listed company, has created a portfolio of high-grade resource projects that focus on the sustainable production of lithium salts as well as fertiliser minerals, which can be recovered from some naturally occurring brines.

Initially, Parkway only possessed the K-Max® technology that was developed to process glauconite feedstock from the Dandaragan Trough Project. Recently, it expanded its technology portfolio via the acquisition of Consolidated Potash Corporation (CPC), which provided it with a direct ownership interest in the aMES™ technology platform.

Parkway has recently launched its new website, incorporating additional information on the NMLP and KLPP, and the aMES™ technology.

More than 250,000,000m3 of concentrated brine is produced daily, and almost half of the brine is produced by desalination plants. Also, the large amounts of primary and waste brine are produced from mining (potassium, lithium), industrial, power generation and other major industries. Higher processing costs (>$5-10/m3) associated with the processing and disposal of these brines provide an attractive opportunity for Parkway.

As a mining technology company, Parkway Minerals is focused on recovering valuable minerals from these brines, while reducing waste volumes. 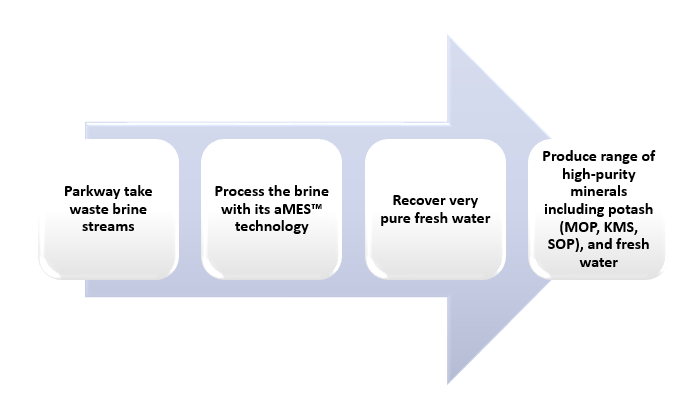 As per Parkway, aMES™ technology is a “Game-changer” that has the potential to swiftly develop a more capital efficient and sustainable potash production operation relative to conventional development pathways.

The challenges of existing conventional technologies are:

The application of aMES™ technology provides the opportunity to improve product quality and yields, produce fresh water (instead of consuming) and reduce project waste footprint. 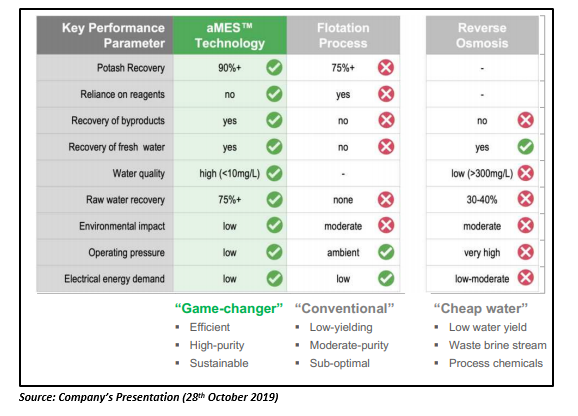 Initially, Parkway will focus on the projects where the aMES™ technology has the potential to deliver significant near-term advantages, including lower costs, higher revenues, and sustainability credentials. The company’s business development pipeline is focused on opportunities that enable “paid-piloting” for third-party projects. The company seeks to share in the incremental value created through the adoption of the aMES™ technology, via royalties.

Parkway cited that given the broad appeal of the aMES™ technology, a large proportion of piloting studies for third-party projects are funded by prospective clients. As per the company, the aMES™ project development is an opportunity to recover costs through up-front licensing fee. The company does not require to become an equity owner in a project to derive significant value.

Parkway also mentioned that a modest royalty of 5 to 10 per cent, that is proportionate to aMES™ based value creation, improves project economics, and the value of the royalty may be the equivalent to a 15-20 per cent equity interest.

The company has provided the following illustrative returns:

Parkway has a plan to undertake KLPP Pre-Feasibility Study (PFS), which represents an excellent opportunity to further demonstrate the advantages of the aMES™ technology. The company expects to realize higher royalty rates as the aMES™ technology matures and believes that the PFS will assist in the roll-out of strategy. 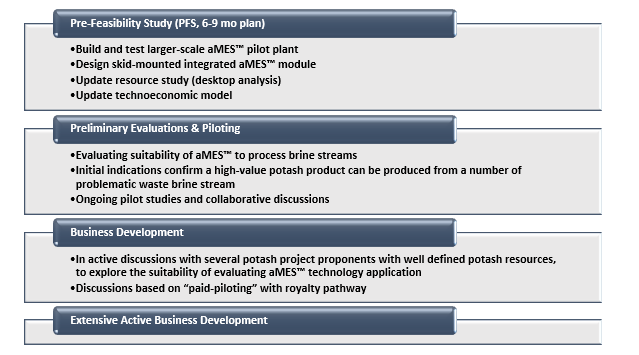 In addition to focussing on the operating projects, Parkway intends to leverage aMES™ plant design into more advanced projects as soon as possible.

The company will formalise certain strategic partnerships through the KLPP-PFS process and will use this as a platform to leverage into other projects.

At present, Parkway Minerals is focused on utilising the aMES™ technology to enhance the sustainability, efficiency and eventually the profitability of potash production across the world, by facilitating the development of further creative project development ideas. The company is on track to revamp global brine processing techniques, via innovative technology to enhance sustainability and create value.